YOUR UGLY WINNING STRATEGY BROUGHT TO YOU BY URBAN MEYER

Share All sharing options for: YOUR UGLY WINNING STRATEGY BROUGHT TO YOU BY URBAN MEYER 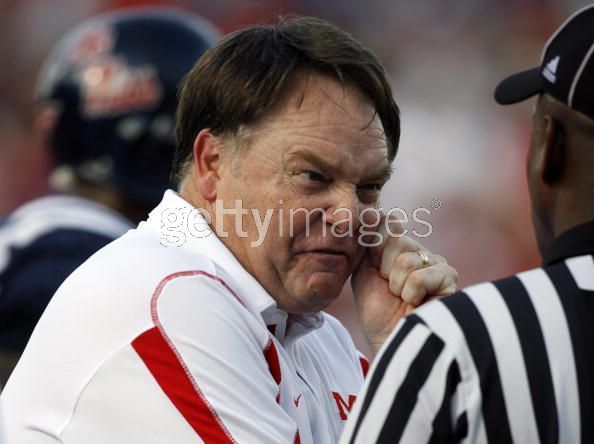 Houston Nutt, professional coach. This is only marginally about him, but the picture is too good not to lead with here. Thanks: J.

The current turnover total for Florida on the year: zero, a number instructive for those of us kvetching and kvelling about the offense thus far, and its lack of Krakatoa-like eruptions a la 2008. The Gainesville Sun, a.k.a. Pravda: Swamp Cabbage Edition, addresses those concerns in typically sunny but timely fashion below. Warning: corrected to do away with the plague of one sentence paragraphs.

The Gators are the only team in the nation with zero turnovers.UF is one of only five teams in the nation that has not trailed at any point in the season. The Gators lead the SEC in total defense (213.0 yards a game), scoring offense (37.3 points a game), kickoff returns, punt returns and punting. The special teams have scored 14 points, only five shy of opposing offenses. Opposing offenses have not started a single drive on Florida's side of the 50.

So, in short: they haven't been good yet because they haven't had to be good? A sobering thought if you, like us, are wondering if and when they're pressed to actually score points, and if they will be able to do so. To be perfectly frank about the offense for Florida thus far, it still looks like a live dress rehearsal that someone accidentally sold tickets for: Miami was the audition for receivers (Louis Murphy, come on down,) while Tennessee was the audition for running backs (Emmanuel Moody, 55 yards on nine whole carries! Cue rain of frogs.)

Ole Miss and Arkansas probably won't test this ongoing dry run on the field for the Florida offense; in fact, Ole Miss makes a particularly disastrous matchup with Florida, and not in a sense of pending Florida doom because Ole Miss is last in time of possession in the conference, and it's not because they're scoring scads of points in flashes. Then again, consider the next worst team in terms of time of possession: Florida. Stats are fun, and endlessly misleading!

P.S.: Houston Nutt in crazier than a sack of rabid weasels.