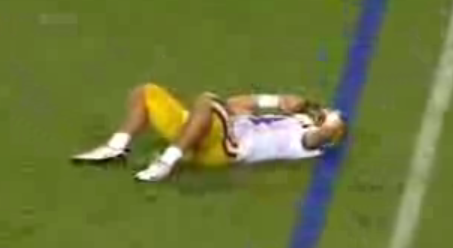 Andrew Hatch: Golly, that smarts. Let me sit down for a second.

LSU Team doctor: (puts down cigarette.) Hold on there, son. Wass' rong with you?

Andrew Hatch: Oh, I'm just...just a bit woozy, you know? Like someone hit me really hard.

LSU Team doctor: (lines up needle with vial) Hold on there, son. Gonna take care of that right here and now.

Hatch: No, doc, I...wait, that's drain cleaner. Very clearly on the side of the bottle. Right there.

Hatch: I...wait just a goshdarn second. You're the doctor. You're supposed to tell me if I have a concussion. Do you even have a medical license? 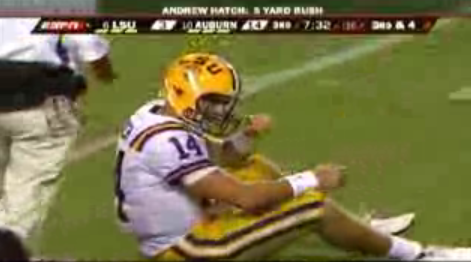 Coach Miles: Hey, lemme see how my boy Andrew is doing. Jerraud Powers got ya, didn't he? Just WHAMMO reached in and popped you, right?

Hatch: My, it was a humdinger of a shot. I think I'm ready to go, though.

Miles: I'll be the one who determines that, Andrew. First question: where are you right now?

Miles: Good! Now, tell me what church you go to?

Miles: HA! What is that?

Hatch: Well, you see, there were these lost tribes of Israel, and there was a guy with a hat and some stones, and...

Doc: (picks up cigarette) More like "stoned," if you ask my medical opinion.

Miles: HAAhAHHAHAHAAH!!! And he's not even a doctor! Kid, you sound positively scrambled. Now, answer this question: How did you get here?

Hatch: I don't really appreciate the comments about my religion, coach. But if you have to know, I tranferred from Harvard, and--

Miles: HARVARD!!! Oh, God. Get the stretcher. He thinks he transferred here from Harvard. That's rich. Can I get you some tea, son? Or perhaps a chai latte? Do they even play football there?

Hatch: Why, yes they do!

Miles: "Pardon me, but your cravat was knocked crooked by the rude force of such a brutish tackle!"

Doc: "My yacht is worth more money than your yacht!"

Miles: "After the game, I shall have crumpets and examine my stock portfolio!"

Miles: "I think I'm going out to Hollywood to write a screenplay and test out the business!" 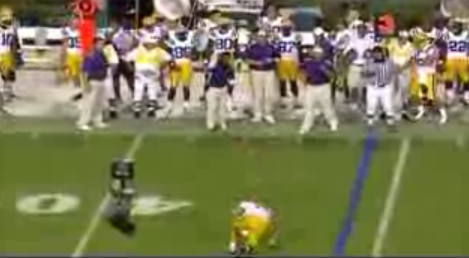 Hatch: No, I'm not concussed! I really am Mormon, and I really did transfer from Harvard, and--

Doc plunges a needle containing sedative into Hatch's arm. He stops speaking, goes mute, and is helped to the sidelines by trainers.

Miles: Great stuff right there. Can you believe that?

Miles: Um, who are you, anyway?

Doc: I'm just some guy who randomly injects football players around here. I'm not even a doctor. Hell, I'm not even a high school graduate, Coach. I don't even know what half of this shit is.

Doc: I dunno. But whatever I put into the d-line seems to be working.

Miles: You just keep doing what you're doing then, Doc.