To cap off a lackluster hate week, we salvage by threatening each other with the worst tortures we can possibly think of. Enjoy?

Holly: It's been too long since I was referred to as a "dick mitten."

Orson: I will open this with: I will throw you in a closet full of BEES and name Dave Clawson as your offensive coordinator.

Holly: I don't even need to do anything to you. I will strand you, as is, in the Wisconsin student section. They'll love your fluffy widdle fauxhawk.

Holly: Or from the FREE HAM sign I will place about your neck.

Orson: Speaking of Booze: how is Johnny Majors?

Orson: Damn you. That's the worst thing you could have threatened me with.

Holly: You led with a body blow. It was that, or assigning you to Ben Mauk's legal defense team, which lord knows has to still be operational.

Orson: I will let your team win a national championship, but not with your heralded white quarterback, but instead with a mobile black qb who took money from boosters.

Holly: So will I! (Chris Leak was getting help from SOMEBODY.)

Holly: Maybe he's born with it. I will tell Will Muschamp you're hurt.

Orson: I will give you a house next to Neyland Stadium, but it will be on "Casey Clausen Court, not Peyton Manning Way.

Holly: I, in return, will subject you to a variation of waterboarding known as Jimmy Clausen Hair Runoff Torture.

Holly: After which you will be required to pull out Charlie's post-op stitches. Without gloves or a mask.

Orson: I will cover you in batter and signs reading "Free Ammo!" and throw you at a horde of LSU fans.

Holly: I will inform Randy Shannon that you failed to separate your recyclables. His sad, disappointed eyes will drive you to seppuku.

Orson: (Like anyone in Miami recycles.) I will stab you to death with the planet Mars.

Holly: I'm telling Mike the Tiger you sassed him.

Orson: I will give out your cellphone number as Erin Andrews'. The sharks will never cease their circling.

Holly: I'm giving yours out as Greg Robinson's. A different sort of shark.

Holly: I will show you the true meaning of the verb form of Kragthorpe.

Orson: I'm pretty sure that involves my anus, and not in a good way. 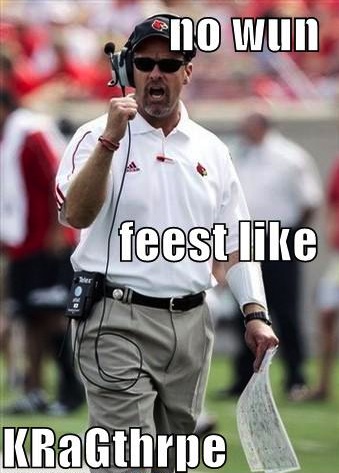 Orson: I will make you go menswear shopping with Chris Fowler on clearance sale day.

Orson: I will force you to work as a gravy swabber on Charlie Weis' new 18 foot long land-yacht, the Frying Crutchman.

Holly: You'll be laughing when I strap you to a mechanical bull, sidesaddle in front of Brent Musberger, who's 97 sheets to the wind and singing bluegrass.

Orson: You will wake up in a bathroom. Your leg will be chained to a radiator. A saw will be on the floor. A loop of the Randy Sanders 2005 offense will be running on the television. Make the decision you must make.

Holly: Good, because I'm sending you to a Baptist picnic with storebought banana pudding. And while you're gone I"m hiding Big Red under your bed and Little Red in your closet. It's no use running.

Orson: I will tie you to a post and allow Mike Patrick to read his journals aloud to you. No man has made it past page 16 without becoming incurably insane.

Holly: Giant Trev Alberts is just outside the door. He heard what you said about his pores. And he's most displeased.

Orson: I'll shoot you with a gun that fires other guns.

Holly: I'll shoot you with a bear-gun (that's a gun that shoots live bears)

Orson: I'll do that, but instead of bears, it will fire bullets. Wait...

Orson: I will turn you into a man just to cockpunch you.

Holly: I will do the same OOOOHHHHHH BUUUUURN In summation: BEEEEEEEEEEEEEEES. Oh, and I'll cut you. Again.