RUDY CARPENTER: AN ATLAS OF PAIN

Share All sharing options for: RUDY CARPENTER: AN ATLAS OF PAIN

Rudy Carpenter lines up against Georgia this weekend, a matchup most people in Atlanta seem to think may result in Carpenter ending up as a thick reddish/yellow paste on the turf of Sun Devil Stadium. Consider, if you will, the concept we repeated in Hayes vs. Hall this week: that nothing can be done to Rudy Carpenter that has not happened to him already. He's been benched, taunted by name by an entire defense, was sacked 57 times in the 2007 eason, has taken deathly shots from the Pac-10's nastiest defenders, and was trampled by a herd of runaway moose as a child. All of this, and he still has 33 consecutive starts under his (hernia) belt.

If his history of playing through hasn't impressed you yet...well, perhaps a helpful chart will. 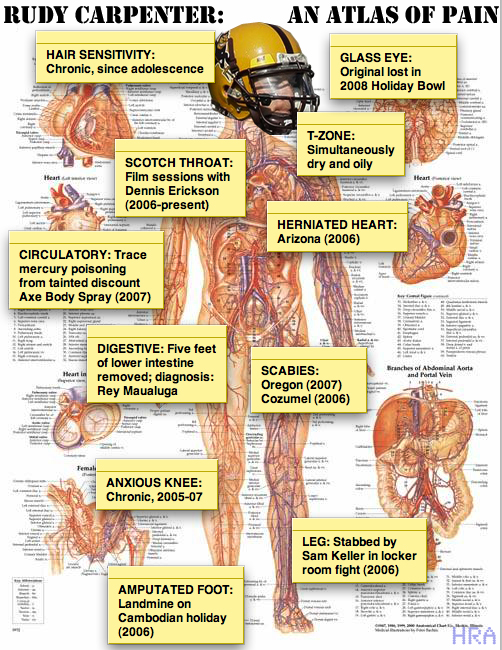