Welcome to our Factor Five Five Factor Preview of West Virginia at Colorado. If this seems loopier than usual, we blame the lack of oxygen up here. In Atlanta. At 1057 feet. 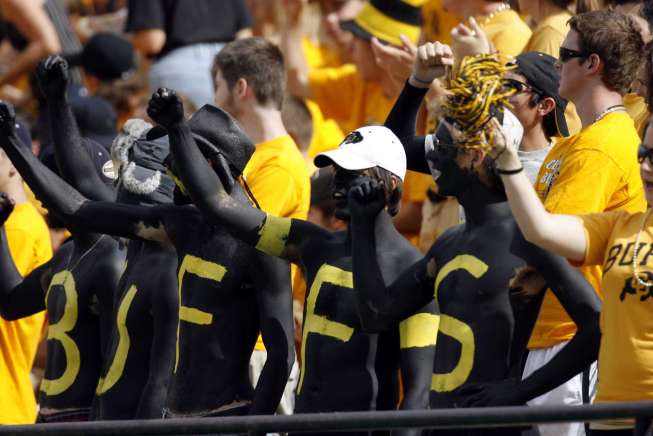 Ahhh, blackface: do you ever fail to amuse? GO BIFFS!

Category one: Nebulous Statistical Comparisons of Dubious Validity. For West Virginia, we will select the number 5380, or the number of feet above sea level that Folsom Field sits at give or take a few feet here or there depending on how the location of your seats and how much Boulder-standard zoink weed you've consumed prior to entry.

Every time I write something about Bill Stewart's reluctance to make a big deal out of the altitude problems playing in Colorado, the e-mailers come out of the woodwork. They relate personal stories of the difficulties they've faced adapting to altitude and begging someone - anyone, please - to convey the seriousness of the situation to West Virginia's coach.

We would pay at least thirty dollars to read one of the more impassioned one of these e-mailers.

Altitude is and isn't a factor for teams in Colorado: Florida State trounced Colorado in year one coming from the frosty alpine valleys of Tallahassee, and most teams build in as much extra time as they can in order to acclimate. According to Bill Stewart, who attended the Air Force Academy, it won't be an issue.

Meaning it will probably be a problem, and West Virginia's players will, like stranded Indian mountaineers on Everest, begin clawing their clothes off and hallucinating sometime in the third quarter.

The Nebulous State of Dubious Statistical Validity for Colorado: 12. As in carries for Noel Devine against East Carolina. The stated goal for the season for West Virginia was to get Devine the ball 20-25 times a game to take the running onus off Pat White, and Colorado will see much, much more of him and his Frogger sidestep than ECU did.

Advantage: West Virginia, because their may not be anyone on Colorado's defense besides George Hypolite who can handle Devine in the open field, even if Bill Stewart decides handing him the ball from the fullback spot is the best way to utilize him or something else of such exemplary brilliance.

Category Two: Mascot: There's an unshakable math. It'd be fun to say "Ralphie stomp man in oily buckskin tuxedo." That man, though, has a gun, and the last matchup between savage, uncouth men from Appalachians streaking westward with muskets worked like this: 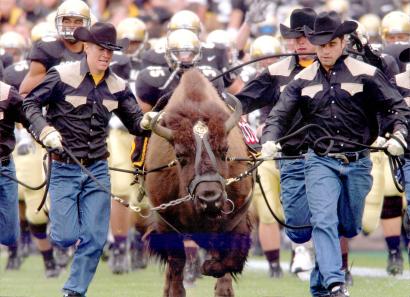 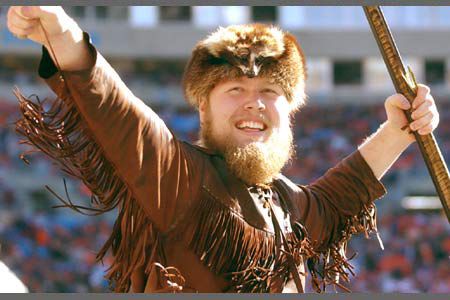 Category Three: Aura. No contest: Colorado is aura, man. It's the twilight zone where fifth downs happen and where the Holy Roman Empire stage of the Nebraska empire meets its final, definitive beheading--the Chris Brown game, the 62-36 2001 defeat of the Huskers. West Virginia is coming in with a head coach quickly losing his (delicately phrasing) "emotional" fanbase; Colorado has a motivational speaker of a head man who spends his offseasons climbing Macchu Picchu and writing phrases like this:

What can we do with that? Nothing. It's sarcasm and irony proof. You could make fun of Dan Hawkins for three years straight, strapping him to a wall in a mineshaft and just hurling years of textbook mockery while denying all but the most essential nutrients and vitamins. Then, when you were finished, he'd look at you and say, "Help me help make you the person you could be." Then, you'd break down crying and let him go, and probably go off to read The Secret together.

Category Four: Names. West Virginia drops an airstrike on this category and runs for the hills. And you will recognize their magnitude:

Not even the Spartan majesty of "George Hypolite" can put the Buffaloes into feeble contention with WVU in this category. Their roster is the San Luis Potosi of astounding names; we shall mine its tailings for years.

Grudges? Scores to settle? Sheer cussedness? Hey, West Virginia had a bye week after losing to East Carolina. No, there's no motivation there whatsoever. Could this be an odder game, though? A hippie-ish bourgeois Western school with a rebuilding no-huddle team (and watch, they will bust out the no-huddle tonight that the Buffs allegedly installed over the offseason in grand fashion) and a slightly relaxed fanbase against a fanatically followed spread run team from a rural Eastern state coming into the early shades of a decline whose degree is yet to be determined? Look for weird, and by weird, we suppose we mean Colorado-weird.