Welcome to our Factor Five Five Factor Preview of KSU at Louisville. This used to be six factors, but we tend to count like Aborigines: one, two, many. So actually listing five topics is a bit of a stretch anyway, let alone going to six.

The topic of day: tonight's matchup between Kansas State and Louisville, the matchup that had to happen because America demanded it, but only in lieu of working or spending time with family, and because the two programs were starving for attention and went to great lengths to get said attention. 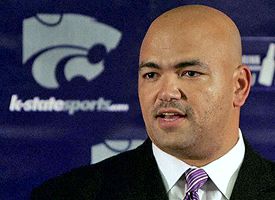 Notice the pseudo-stache: slipping Mustache Wednesday under the door!

Category one: Nebulous Statistical Comparisons of Dubious Validity. For K-State: 57 points a game. Kansas State earns plaudits for being explosive! Which they were against Montana State and North Texas, meaning we don't know anything about them offensively other than Josh Freeman can complete around 75 percent of his passes against mediocre competition, and that he's nowhere near the man-mountain he was last year when he came into practice using the assumed name "Terrence Cody."

They're one more team with no readable baseline at all thanks to early season warmups against no one at all.

Nebulous Statistical Comparisons of Dubious Validity, Louisville: 18.5 ppg, a deceptive total thanks to them facing a Kentucky team who racked up 17 points off Louisville turnovers in their 27-2 loss. Ron English has punted Louisville into an inversion of last year's team: game-tight on defense, but atrocious on offense, as anyone who saw Hunter Cantwell's performance against Kentucky will attest. He was throwing the ball to imaginary men and naming the clouds individually at the end of that game, and it was not pretty or funny, even to a sick, sick man like yourself. Defense will save them this year, since the competence transfusion over the off-season was zero-sum affair.

Advantage: Kansas State. We mean, did you see the Louisville offense? Really?

Category Two: Mascot: We'd put a picture of K-States mascot here, but two years ago we received a very sternly worded email that K-State 's hideous mascot, which is really just a man in a football uniform with a cat head plopped on his shoulders, is the exclusive property of the university, and is not to be taken lightly.

Thus, by default, we take the toothed bird, because hostile as he may look, he doesn't care if you take a picture, unlike some ASSHOLE FAKE CATMEN we know.

THAT BIRD HAS TEETH OMG RUN!!!

Category Three: Aura: Kragthorpe versus Prince in a...holy hell, we can't even psych up the energy for a death match here, so oddly conjoined are these two relatively mystique-immune programs. Steve Kragthorpe might be phenomenally overmatched by his job; Ron Prince dances when excited and has a fetish for tiny running backs. The deciding factor will be...hey, Schnellenberger coached for Louisville, right? Even a trace of his scent in the hallways gives the Cardinals the advantage. (And also gives bystanders a running .05 BAC on contact.

Category Four: Names. Louisville wins, no matter what. In fact, we'll stop here and just say that we're not even checking Kansas State's roster. You can't compete with Louisville's TE and the only man who can break into Cartagena Prison, get Oscar Juarez out alive, and do it all without scarring a single one of his flawless abs:

Advantage: Louisville. (Yes, even with Xzavier Stewart on board at K-State. Can he fly the space shuttle while making love to a model? No, he cannot.)

EDSBS FACTOR FIVE FIVE FACTOR PREVIEW SUM: 3-2, LOUISVILLE: You've Been Factor'd! Given the track record on these, this is a good indicator you should put your money on K-State like ten minutes ago. Whatever: this passing fad called "science" will blow over soon enough.