BEANIE WELLS AND THE FOOT OF DOOM

Share All sharing options for: BEANIE WELLS AND THE FOOT OF DOOM

Beanie Wells is now officially "doubtful" for the Ohio State game. You didn't think the sound of a million Buckeye fans shitting themselves would be so near-melodic, did you, like the Tuba of Gabriel, did you? Well, it is:

Tressel said Thursday there was lingering soreness for Wells in his right foot after he worked out the night before. Wells did not practice with the team Thursday morning. 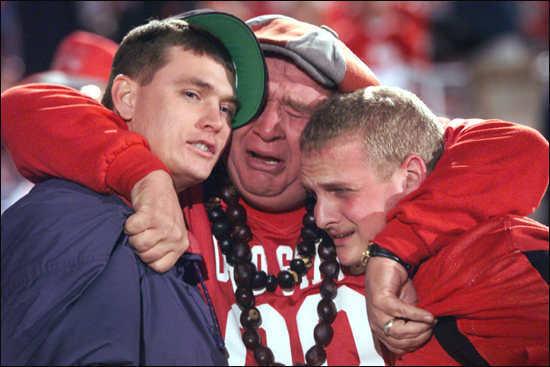 It's healthy, and means you're in touch with your feelings.

In addition to upping the point spread considerably, the lack of Wells OBVIOUS FOOTBALL POINT COMING means SERIOUSLY OBVIOUS the Buckeye run game will be considerably diminished, meaning USC will DURRRR-HURRR tee off on Todd Boeckman at will. It also means that, in more colorful terms, Rey Maualuga will be sitting just over a crouched offensive guard at the snap quietly murmuring "I come in peace, I didn't bring artillery. But I am pleading with you with tears in my eyes: If you fuck with me, I'll kill you all."

In summary: Beanie Wells' foot doesn't work, Rey Maualuga still frightens us, and Marines r kewl. That is all.