Two games in? Sure, that's enough to make a full and thorough judgment on a coach's performance overall in week three of the season. From first to worst thus far, we review the new crop of coaches slaving away in the fluorescent-lit halls of your football program to make harder, better, and faster 7-5 BCS football programs.

1. Bo Pelini, Nebraska. Rolling into this ashes of the Callahan regime, Pelini's expectations this year included a.) don't be an insufferable and ineffective workaholic snob, and b.) win six games or so and make the rest look respectable. Accomplished, and on track for the second: there's your summary thus far. Pelini is on pace to take his interim appearance in the 2003 Alamo Bowl and his first appearance on the mike at the press conference announcing his hire, suture them together, and then discard the rotted excess flesh of 2004--2007 in one easy surgical procedure. 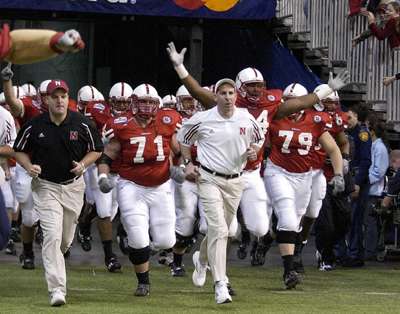 See? I did this, then got hired, and nothing happened in between. Nothing I tell you!

Pelini already has enough of an established comfort zone to joke comfortably about "his worst practice" yet last week, juggle a possibly silly three-running back rotation, and otherwise look the part on the way to a likely 4-0 record leading into the October 4th matchup with Missouri, where the 'Huskers look forward to alternating soft zones with bewildered and nutless blitz packages. Wait, they fired Kevin Cosgrove? Apologies. What we meant to say: they're going to blitz the living shit out of Chase Daniel.

2. Art Briles, Baylor. Still alive, clear eyed and responsive! Shiny coat, friendly, and wags his tail when you greet him! Powerful, firm bowel movements and good appetite. Keep up the great work! (We evaluate any Baylor coach in year one based on veterinary standards of health, not football accomplishments. It's unfair to use any other metric in Baylor's case.)

3. Rick Neuheisel. One for one on the field in a stunning, well-executed upset on national television, dashing around recruiting with a helicopter, and making heartfelt speeches to the Rose Bowl like it was a rubber chicken dinner for thirty with ease and emotion to the point where we half-expected him to break out the guitar. Bravissimos all around, especially since he hasn't been caught in one of his clever disguises visiting recruits in covert food-court meetings. (I'm not Coach Rick--I'm MRS. BUTTERFIELDS! Play along, kid...)

Addition apologies we only blame our own incompetence: 3a: Paul Johnson, Georgia Tech. Like David Cutcliffe below him, Johnson's initial success this year is as much a product of his surroundings' squalor as his own skill. Tech's offense looked moribund at best against an active, feisty BC defense, totalling 235 yards, turning the ball over 3 times, and looking unsurprisingly out-of-sync against a fast defense pressuring their option runs. They also won and displayed a rapacious defensive line that masks any inadequacies the rest of the defense may have brilliantly. The ACC is bad, Chan Gailey was worse, and Paul Johnson is neither: all of this puts him up in the chip count early, and with time and practice they'll only get better, especially with Jonathan Dwyer as your dive threat up the middle.

3b. (Yes, we're still adding these in. That's how utterly incompetent we are on this Wednesday. Tuesday. Whatever. ) Rich Rodriguez, Michigan. We know that Michigan has the wrong starting quarterbacks for this offense, has just moved a walk-on into their left tackle spot, and may engage in one of the most mutually embarrassing displays of prime division one football this year when they play Notre Dame this Saturday. What we don't know is whether any of this was avoidable (probably not, we suspect,) given that Michigan was switching from four decades or so of one offensive system or not. His flexibility in running his system is to be commended, ignoble as the results have been, and the PR battle seems to be bending his way thus far, especially now that reporters have the unique and strange advantage of watching practice every now and then. Regauge once the inevitable disaster game blows through town. (And it will; see Urban Meyer, year one, 31-3 in Tuscaloosa for a corollary.)

4. David Cutcliffe, Duke. Avoiding the stress another season of coaching Volunteer football is a win for his health both in the sense of getting away from the insane eating habits of Tennesseans ("More pork soda, sir?") and in avoiding the micro-scrutiny applied to every move made by the program. ("I saw Coach Cut at the Starbucks' this morning, and his purchase of French Vanilla Scones clearly shows a lack of respect for our program.")

If they win four games this year, Duke can call it a fairly successful year, relatively speaking. Any more would be miraculous in any other conference but the ACC, meaning it very well could happen if the current conference wide swoon continues. Bonus note: if you have had an erection lasting for four hours or more, just wait until November 8th when Duke plays N.C. State. That should take care of it in no time flat.

4a. GIGGITY!!!, Ole Miss. It's hard to include this one, since based on early performance it looked like Ole Miss and Arkansas just switched personnel across the board. Rebel fans must be pleased with the performance at Wake Forest, the emergence of Brandon Bolden at running back, the menacing blocking of the o-line, and the spotty but recuperating performance of the defense. Get the shaved bear at defensive tackle in shape and we'll be getting somewhere fast. Nutt: "You know what I like about Jevan Snead? He's gooooood. [/points, mesmerizes.]

5. Bill Stewart. Oh, fiddlesticks has taken the spot of "oh fuck" at Morgantown, and the results look unpromising thus far. Bill Nelson has enough talent on hand to decimate your Villanovas but not enought fear and raw anger to get a group of young, aggressive men to point their malice in one uniform direction. Against ECU, West Virginia looked like a team that wasn't terrified by their coach, which WVU teams of yore under Rodriguez clearly were in the best of all possible ways.

Bill Stewart, however, blames society for the negativity. We're not kidding.

"Oh my God, yes," he said between gritted teeth. "This is the second game of the season ... Jesus, Mary and Joseph. That's what I don't understand right now ... what's going on in our society?

A foolish and increasingly pervasive practice of looking at evidence, Coach Stewart. We know, it's gone too far. It is premature to suggest WVU won't recover, which they will, to some extent. But WVU did not look as intense as they have in the past, and that is something we'd bank on continuing for the remainder of the season. You don't lose hard bastards like Rodriguez and Barwis without losing some "oh fuck" edge along the way. Bonus fun, though: he still has Pat White, putting him ahead of...

6. Bobby Petrino, Arkansas. Looked up from blackberry and contract offers long enough in the fourth quarter to call plays to get Arkansas late, most unimpressive victories over the Western Illinois Leathernecks and University of Louisiana-Monroe SEC West Upsethawks. Faces Texas this week, where depantsing and subsequent incineration of team pants at the hands of the Longhorns will occur. On the upside, Casey Dick leads the SEC in passing going into week three, a stat that is either a stunning indictment of the early slate of games and quality of SEC quarterbacks, or a testament to the mesmerizing powers Bobby Petrino has over previously inept quarterbacks.

6. Paul Wulff. Has lost his first two games by a combined score of 105-16. Will be going on the road to Baylor, where his team will lose to bright-eyed, still responsive Art Briles and Baylor. Still has bulk of conference schedule to go. Pain of imagined. Defeats. Shorten. ing. Sent. En. Ces.

7. Mike Sherman, Texas A&M. A loss to Arkansas State and this outfit should sum it up in total:

Mike Sherman will be hosting a new season of Casino Cinema, sponsored now by Tommy Bahama: Clothes for Swanky Fat Men and their Low-Impact Lifestyles.