Alternate reality one! Outmanned going into a crucial matchup with USC, Jim Tressel, desperate for an edge against a formidable foe favored by double digits at home and looking for some way, any way for Ohio State to not drop a third, non-conference, high-profile game in a row, thus earning the disdain of pollsters for the rest of the season and botching any shot at a national title barring massive collapse by all other contenders, takes the most drastic step of all: he injects a huge dose of pure Essence of Ohio into USC's California-approved, all-organic, low-fat pre-game meal. 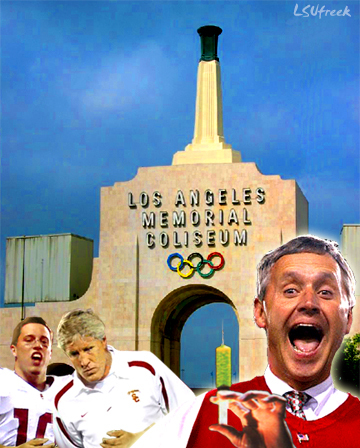 Reaction from the players and staff: immediate and emotional.

"The sadness...the...anger...I don't know how people don't kill themselves feeling like this," says linebacker Brian Cushing. "And I'm from New Jersey. Trust me, I know misery when I feel it."

"I don't know. We're gonna have to fight this but...I feel so sad right now, like someone just killed a puppy in front of me and then drained all the color from my world," said Rey Maualuga, vomiting into a trash can in between sentences. "I scarcely have the energy to decapitate three people today. That's ...that's just not me, man."

Pete Carroll would be unavailable for comment, spending much of his pregame locked alone in his office with a loaded gun and bottle of scotch.

With the Trojans poisoned with the pure, undistilled misery of an Ohio existence, they would put on a shoddy show, turning the ball over three times and allowing 200 yards rushing to Ohio State in a sloppy, undisciplined 17-13 win over the Buckeyes. (But it was close!)