Perhaps we've gotten off on the harsh bus too many times on Ty Willingham. What do we know, really? We don't sweat it out there on the fields, we're not in there breaking down game tape, reviewing our recruiting targets, we don't have access to the grinding day-to-day work making up the bone marrow of a distinguished football body. We don't see all the stuff that goes into those four hours on Saturday, right? All we see is what's on the field, and even that can be... 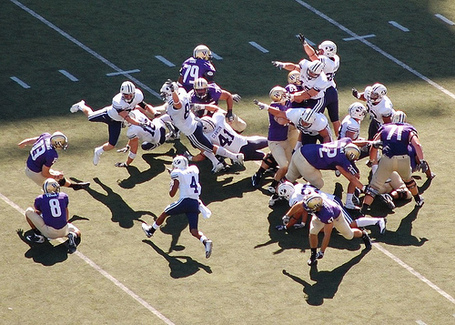 Apologies for our moment of sympathy. That dude is Vince McMahon fired. And hey, don't blame the refs for making a call they were specifically bound by rule to make:

"The rule seems pretty cut and dried," Dave Cutaia, coordinator of football officiating for the Pac-10 Conference, said of Rule 9, Section 2, Article 2c, which states that a player can be penalized for an unsportsmanlike act for "throwing the ball high into the air."

Giving another rule for a referee who works once a week is a bad idea to begin with, and can only result in tears like Saturday's following the BYU/Washington game. It also has had an unintended but, in retrospect predictable result: it has given Ty Willingham a bold new variation on losing a game in the fourth quarter. Don't say the NCAA Rules Committee never gave you anything

(BTW: no one knows what a horse collar tackle is; it's as if the rule weren't included in this year's memo to officials across the board. Maybe it's an angles thing, but we didn't see a flagged horse collar tackle all weekend that we can remember, and they happened on several occasions including the Florida/Miami game, where Florida tacklers yanked Robert Marve down by the back of this pads at least twice. Not that we're complaining, Referee Penn "My name is a complete and ironic sentence" Wagers.)