Welcome to our first Factor Five Five Factor Review of the year. This used to be six factors, but we tend to count like Aborigines: one, two, many. So actually listing five topics is a bit of a stretch anyway, let alone going to six.

The topic of day: tonight's matchup between South Carolina and Vanderbilt. Don't laugh. Someone's gonna die. Someone always does when these two meet. Blood. Fires. Weeping mothers clutching pictures. Apologies. Not really. But it's better to think of it that way, because its a fairly weak slate of games for week two.

Category one: Nebulous Statistical Comparisons of Dubious Validity. Vanderbilt made us look like grand imbeciles when Miami opted to play a 1-1-9 defense, or whatever else they did to allow Chris Nickson to run for 166 yards on them. His numbers read like the reversed digits of a classic run-option qb: 166 rushing, 91 yards passing, and 2 TDs on the ground versus one passing. Unless we're missing the early baby fits of a Vince Young in the making, we will assume Miami's run defense is woeful and will remain woeful. (Having Seen Chris Nickson play before, we feel free-ballin' comfortable saying this.) 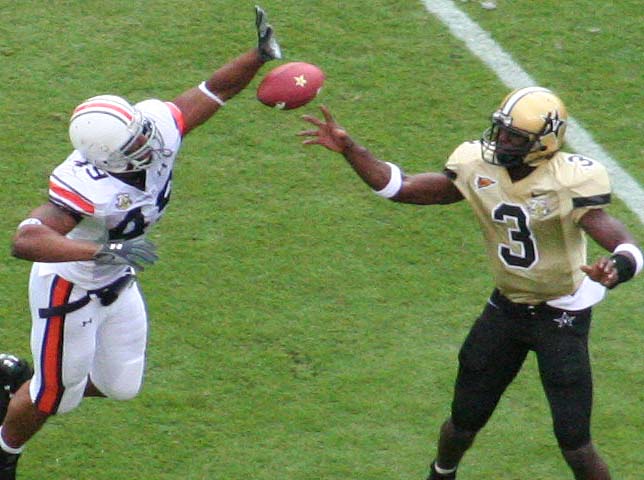 No, it's yours, seriously. Take it. Photo appears courtesy of KENNY SMITH, who has IMMENSE BLOGGING BALLS. There, how's that?

Vandy also produced the same number of first downs, 17, as the Redhawks. So before boarding any and all Vanderbilt for President of the Universe bandwagons, consider that while they were better than Miami of Ohio, it is a weak and not overwhelmingly convincing comparative to make.

South Carolina's stat of dubious validity: 34 points, most racked up against an NC State team crashing into full incoherence in the second half. Smelley is this week's answer to quarterback crisis at South Carolina; remaining the answer is indefinite so long as Stephen Garcia is over chatting with tiny Matthew McConoughey on the sidelines. What may be definitely said: Tommy Beecher will only touch the ball again in the most odiferous of garbage times, and that South Carolina will run the ball a bit less than they did without Beecher in the lineup. (Last week's 27/42 pass/run ratio will not appear again.)

Category Two: Mascot: South Carolina has Cocky, a wiki-described "Anthropomorphic gamecock" who sadly lacks the gut-ripping razors strapped to his legs, an omission committed due to concerns for "public safety." He wins out here nonetheless thanks to the weak competition offered by the Commodore's mascot, Mr. C, a frightening jumbo-headed Simon Legree figure wearing a white poodle's corpse topped with a ginormous naval hat. If you're looking for him, check out his cameo appearance in Guillermo Del Toro's Pan's Labyrinth, where he chases the protagonist out of a cave at the 58:30 mark or thereabouts.

You may remember me from such Spanish Neo-Surrealist Classics as Pan's Labyrinth and Porky's.

Category Three: Aura: South Carolina. As miserable as the history of South Carolina football has been, it pales in comparison to Vanderbilt, a program whose best season in recent history involved getting to 5-7. The atmosphere surrounding the program can be described with the words "program," "atmosphere," and "has none." Picking on them would be cruel if they weren't filthy wealthy and successful in every other facet of life, so full speed ahead, "Commodore," and stab them with the last dregs of collegiate barroom Marxism you can muster. When the counter-revolution comes, they will feast on your bones and laugh while dabbing their lips with high-count linens.

Category Four: Names. We'll stop everything here and just save effort for all of us. Salute an officer when you see one, soldier, and here comes one: South Carolina's cornerback Captain "Captain" Munnerlyn. 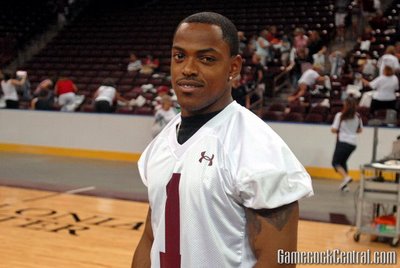 Grudges? Scores to settle? Sheer cussedness? Double-Stuf-sized bitter: Vandy upset a supremely overconfident Cocks team at home last year, and while we may be all watching Spurrier the White in his diminished, post-Redskins form, he remains as spiteful a coach as one could imagine. If there is a single instant of weakness to throttle Vanderbilt with, Spurrier will take it and call a kneebreaker of a play. Then, if the South Carolina script holds true, this will be an incompletion, followed by a punt, and then the game will drag on into the fourth, and he'll switch qbs again, and...wait...this isn't going where we thought it would DAMMIT this Garmin motherfucker is lying to us again...

You've Been Factor'd! South Carolina, in an incomplete, uneven, and sloppy act of revenge.