GREG ROBINSON PAIN INDEX: WE ARE AT ELEVEN

Share All sharing options for: GREG ROBINSON PAIN INDEX: WE ARE AT ELEVEN 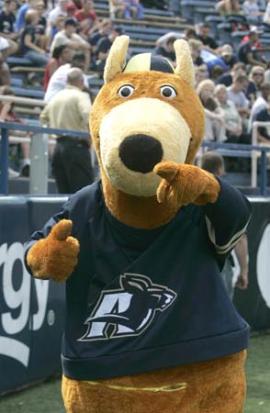 I will eat your children, praise Allah. Love, Zippy.

Syracuse in the Gerg Robinson era in the Big East: 2-19 overall, with the two victories coming over the eleven-man sieve that was the 2007 Louisville defense and a 20-14 win mistakenly labeled as a conference win over "UConn." We're certain that if the records keepers of CFB look back, they'll see that was not the University of Connecticut taking the field that day under the Carrier Dome, but instead a plucky but overmatched University of Yukon team. (Motto: Y-U? Y-Not? Answer: frostbite, starvation, wolves.)

In addition to finding sudden joy in mistyping Gerg Robinson's name, since "Gerg" seems like such a better nickname than any other we can make up, the long, painful, fat-man-tumbling-downhill decline of Syracuse is made all the more interesting for us as teams now seemingly out of league are now licking their chops at the prospect of playing the Orangemen.

Sick lion, meet your menacing hyena of the week:

''This week is our week to show we can really play. We have to step it up a notch,'' said Zips defensive captain Doug Williams, a senior linebacker. ''We have to work hard, practice hard, give it all we got and show we are a team that can win a BCS game.''

They're unaware of the clause excising Syracuse from formal consideration as a "BCS victory" this season, but please don't tell them that. TNIAAM has the essential review here, where you can admire both his skill in learning all things Akron in a matter of days, and also admire his continued bravery in the face of a continual, unrelenting cockslapping by Fate. Godspeed, you Orange Emperors. You'll need it: Zippy is gaining on you.