...as in, like an atom, there was mostly empty space in Cleveland for the Kent State/Boston College game. Announced attendance: 10,788. Number of confused Browns fans who showed up: 5,037. Number of beers consumed by those fans: One millionthousandeighty. 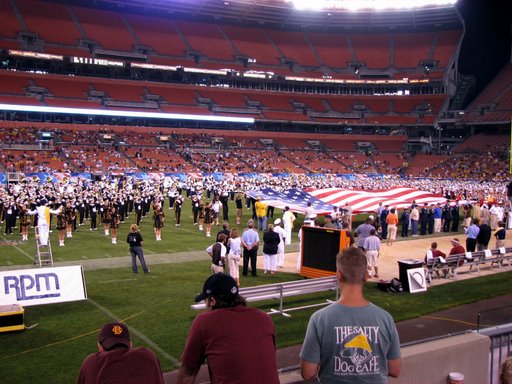 For future reference: if you need a quiet, empty place to spray-paint some boards or cook chitlins without bothering anyone else, a neutral site game between the ACC and the MAC looks perfect. Add in the well-spaced fans at the ACC Championship Game, and we're just heaping burning shame on the ACC it really doesn't need, now. You've got a great personality! Your skin, oh, it's fabulous! And there's that degree you've got! You've...you've got so much...tears. Great, tears.

They're going to need a minute. Please, turn off the cameras. (HT: Nathan.)