Nebraska made this year's Fulmer Cup in steady but unspectacular fashion, showing enough of the old barroom spite to make us pick them in the In The Bleachers podcast as a wacky but not insane Big 12 North candidate. 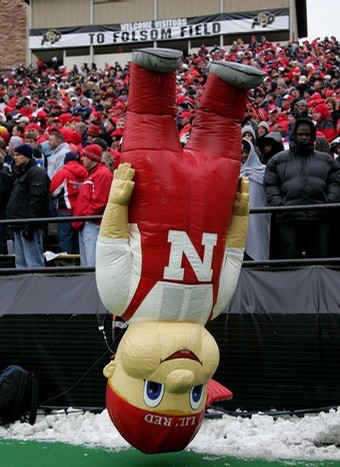 Nebraska remains subtly frightening in many ways. This is only one.

As with all predictions, we reserve the right to change it, deny it, outright lie in the face of its future shame, or to claim it despite never having made it.

At least we're upfront with that, unlike Lou Holtz, who just seems to pick the last two schools who paid him and rolls with that, which is precisely what he did on College Football Live this week, shilling shamelessly for South Carolina and Notre Dame with the goggle-eyed dexedrine leprechaun zeal only Lou can bore into the camera.

Anyway, Nebraska might have earned a bonus point in the Fulmer Cup if we'd known the following details about Andy Christensen's early off-season arrest for sexual assault.

What Mausbach didnt know at the time was that the woman crying had confronted Christensen believing hed reached under her skirt to penetrate her as she stood in another part of the bar.

By then, she told the jury a day earlier, Christensen had dumped two drinks on her head...

The girl with wet hair pulled at Christensens arm as he walked away. She bawled and screamed, but Mausbach couldnt tell what she was saying.

He took his hand up around my neck and threw me.

Mausbach landed on his back. When he got up, he ran out the door to find police. It took six minutes for police to get handcuffs on Christensen, and he kicked a dent in a police Tahoe.

Yes, we might have shorted them a point or two there. Apologies. We regret the error.