The initial shock of the SEC/ESPN 2.2 billion dollar rain-making--you like the way we're dropping it, Norby? Them girls up north ain't got the red beans 'n rice like this, son!--Tony Barnhart opens up his soul and shows us the heart of a true knight in loafers and a pressed oxford:

This is just one mans opinion, but if ESPN is smart, theyll keep the same broadcast team of Dave Neal, Dave Archer, and Dave Baker to do the early SEC games. In fact, the SEC should insist on it.

SAVE THE DAVES!!! The campaign starts now. 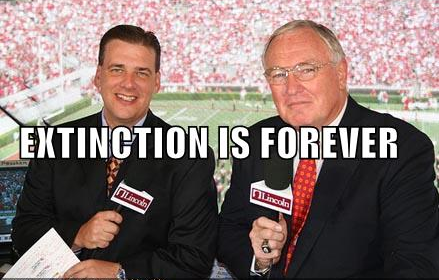 Email ESPN now at their mailbot. Strike now, strike early, and strike often. Let the "Bloody Mary Game" crew continue to work, although perhaps with a crew that can spot the ball without dropping the camera, getting distracted by a particularly colorful bug, or whatever the hell else that forced the JP/LF/Raycom crew to occasionally pull a Star Trek evasive maneuver scene on the audience. Imagine what they could do with sound men who didn't leave live mikes on the entire game somewhere in the equipment truck! Savor the possibilities of a broadcast where they didn't have to talk into antiquated mikes with covers the size of afro wigs!

Do it for us, ESPN, the rednecks and exiled children of rednecks who helped build this $2.2 billion dollar baby. Do it for America, and do it for the Daves, dammit. If you don't consider them one and the same, we'll be taking that dynamite vest and AK-47 off you now, terrorist.