Mike Gundy will call his own offensive plays this fall like a man, who is forty-one. This always seems to loom larger--and generate a tad more angst among fans--for offensive coaches than those head coaches with their fingers in the defensive mix, as if it took so much more brainpower to score points than to prevent them. (An unfair prejudice in both directions: see Will Muschamp and Mike Debord as examples to the contrary in both departments.)

There are differences, of course: defenses won't resort to quite as many alignments and variable assignments as offenses, and therefore the slightly higher level of potential complexity. Defenses have to read them, of course, meaning it's just as mentally complex, if not more so for players actually on the field.

Nevertheless, scheme has its own romance,

and therein lies the public teeth-gnashing over Spurrier devolving play-calling to his son, or Friedgen going back for what seems like the nth time and handing off play-calling to the loving arms of James Franklin, who will run the most affectionate practices in all of college football , or to the continual praise given to Mike Bobo, who took over from Mark Richt at UGA.

The move allowed Richt to be the emotional manbear and not so much of the cerebral field general, thus generating the precise response Richt was hoping for: a sea change in how the team related to him and to each other, and thus the Jacksonville Dance Party, Bowl Annihilation Drill, and everything else good that happened to UGA in 2007.

This is not always the outcome: Friedgen called his own plays for four years, then switched course for three years, and is now reversing field again after a middling outcome pulling the strings himself. Gundy's own move could yield equally mixed results, hopefully generating not only fodder for healthy, well-reasoned online discussion ("FUCK YOU, SHITEATER!") but a second and more spectacular still implosion of Coach Krakatoa on camera.

We're not of any particular mind on the matter, an attitude thus bringing us to Notre Dame, who in terms of antipathy/sympathy we're not of any particular mind on, either. Charlie Weis cashed in on the Godlike CEO theory of coaching value before Nick Saban broke the standard for Godlike CEO pay, banking on his playcalling ability to give them the "decided strategic advantage" leading Notre Dame back to echoey greatness. His is the second most surprising (next to Spurrier's, whose ego is just a few hemispheres larger than the OBC's) given his initial sell and Weis' obvious zeal for play-calling.

The good news for Weis is that the move will work brilliantly, or will at least appear to work brilliantly, due to the timing. Notre Dame, having hit bottom, will improve against an easier schedule and with the benefit of a healthier, less concussed Jimmy Clausen at qb. Whatever luster is lost by the play-calling move will shift and grow in the Program Manager stock, thus planting the seeds for "Charlie Weis Becomes A Head Coach" stories sure to pop up somewhere around mid-October in the press. 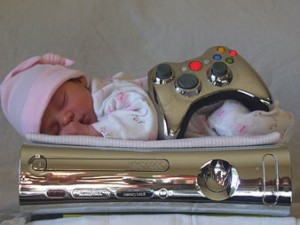 You get the baby. We keep the box.

The fun part will be the inevitable reversal when, in an ironic twist, Weis retakes play-calling duties at one point in the future. Pulling the management lever once means you'll pull it twice, or three times if necessary in order to placate the natives. The only bet to make isn't whether it will happen, but whether it will be faster than Spurrier's rush to the clipboard. (It won't be. Spurrier may take over play-calling during warm-ups against NC State on Thursday afternoon. He'll look like a man who rolled in poison oak and powdered glass if he doesn't have some hand in play-calling.)