Share All sharing options for: FLATLINING: CONTINUING A THEME...

Earlier today, The Kid looked at coaches whose odds for a smooth season were looking less than favorable. This provoked commentary from readers, who wondered how guys like Ty Willingham weren't going to be included in a list.

The reason is simple. Everyone else in the room should make it, except for guys like Ty. They're dead, irradiated by a critical dose of losing, bad timing, lackluster recruiting, fluctuating oil prices, whatever. Certain coaching regimes are on courteous flatline heading into the season; the final hammer of inevitable firing only awaits one last season of confirmation.

Fatal dosage may vary depending on exposure and victories over hated rivals.

It's possible they would survive the does, of course. Anything's possible. But given the numbers, it ain't likely. And unless you're a hopeless homer, all you have are the numbers. The only three guys we can think of that are 1000 percent completely irradiated by loss and in risk of seriously aggressive firing follow. If you're looking for surprise idiocy, look elsewhere. ("Tressel! He only runs the second-best program in the nation and that's UNACCEPTABLE!")

Ty Willingham. It's rare that a coach will give a single smoking gun, a clarion reason to go ahead, contact HR, and tell them they're about to file a bunch of paperwork they won't particularly enjoy.

Willingham has helpfully provided no single smoking gun, unless you count 2, 5, and 4, or his victory totals from the past three years. Which we do. Assume the three year trigger-finger rule, and add one for the exceptional mess inherited by Willingham, and you've got a four-year trial period entering this year.

But even if the win totals can be fudged with "oooh progress player development system implementation," then consider the anecdotal ugly: the weak recruiting thus far in 2008, the "calm demeanor" that can be mistaken for "asleep at the wheel," and the fact that it's been five years since Willingham's had a winning season. That doesn't help either, btw.

Mike Stoops. Mike Stoops could bear the crown for diminishing returns on yelling vs. results. In fact, we won't watch him without adequate safety gear on this season, since he looks, well...damn, does he look near-Jim-Leavitt-angry most of the time? And is that even advisable for people not named Jim Leavitt? He could save his job, but given the torsion his circulatory system appears to be under, is that even a medically optimal outcome here? The Wildcats season sponsored by Lipitor and Drank, who really, really advises you to slow your roll, Coach Stoops. 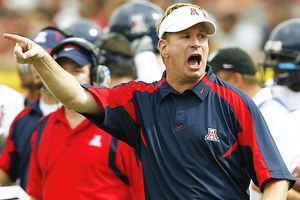 If you see Mike Stoops making this face for longer than one second, call 911. He is having a stroke.

Greg Robinson. "You breathe in vain." It's the best insult from Shakespeare, and it's the best summary of whatever the hell goes on at Syracuse. We don't doubt that people show up and work very hard, and put in lots of effort, ruin their stomachs with gallons of stale coffee, and toil long hours to help the Orangemen go 2-10. We just wonder...well, effort doesn't necessarily equal smart effort, or effective effort. Someone worked really, really hard at Pets.com, too.

It's theoretically possible for Willingham and Stoops to save their jobs. Gadzooks, it may even be probable that Stoops saves his given WSU, Stanford, and Washington's slide into the carport gutter of the Pac-10. Imagining that the worst three-year period in Syracuse football history won't end with Greg Robinson's firing seems beyond even the realm of the theoretical. They might win ten games this year, and even then an incredulous administration might fire him, assuming that, after four months in a parallel universe where Syracuse wins ten games, they have returned to reality and must take care of the serious task of finding a new coach.