While you're analyzing the wonders of the new Michigan offense...consider our corrections. We regret the error.

Monday's profile of Dan Hawkins erroneously reported that the Colorado coach is growing out his hair in the offseason to more closely resemble the school's mascot, Ralphie the buffalo. Hawkins assures our editorial staff that he merely enjoys the sensation of having his locks braided each morning by cartoon birds. We regret the error. 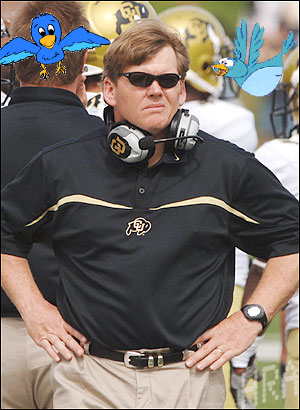 On July 14th, we described Columbia, South Carolina as being "as butt-nasty as the rattiest corners of Zombieratville Corners, Incorporated Hell, Hell, Hellsylvania, People's Republic of Hell That's Right We Really Live in Hell, Motherfuckers." We apologize to the citizens of Zombieratville Corners for the unflattering comparison, which was unfair. We regret the error.

This week's Offseason Injury Report stated that several Wake Forest players were hospitalized following an aborted attempt by Demon Deacons head coach Jim Grobe to summon an actual demon, the lesser god of Hell Bes, for a demonstration of proper blocking technique. The shadowy figure in the scrying circle was actually offensive coordinator Steed Lobotzke. We regret the error.

No jumping offsides with this little guy across the line.

In Tuesday's Crossword, the answer for number 4 Down, "Pam Ward," was correct. However, the clue was not, and was missing an important definite article. It should have read: "What ESPN announcer was a collegiate champion in weightlifting, specializing in the 69-75 kg snatch." We regret the error.

Wednesday's report that Ohio State's Jim Tressel leads Division I active head coach in Median Sideline Bubble Diameter was incorrectly sourced. A spokesman for Tressel states unequivocally that he has never engaged in such a joyful frivolity as blowing bubblegum. We believe him, and regret the error.

Thursday's look back at 2007, The Season That Was, noted that former Appalachian State safety and Wolverine slayer Corey Lynch owes his translucently pale and delicate skin to a childhood spent locked in the attic of his grandparents' manor. Lynch's mother has since contacted us to assure the world her son is not in any way related to the Cory of V.C. Andrews' infamous Flowers in the Attic, and merely possesses a naturally alabaster complexion. She then excused herself without allowing us to question her further, explaining she had left a pot of hot tar on the stove. We regret the error.