Monday's Ryan Perrilloux Memorial Police Blotter misidentified a man killed by Pittsburgh police while "holding [a] meat cleaver and mumbling with a vacant look in his eyes" as the troubled former LSU quarterback. This story was based on inaccurate (though entirely plausible) sourcing, and we regret the error.

On Wednesday, we reported that during a blocking drill in a Notre Dame defensive practice, a collision occurred between Pat Kuntz and co-defensive coordinator Jon Tenuta. The description follows:

...he decelerated from 120 miles per hour to 0 in 1.4 seconds, and gained two huge black eyes from the force of his own slammed-forward eyeballs punching him on the inside of the face. The impact blinded him for two days, during which we must imagine his response was to walk around and simply dare the world to put things in his way. Oh, and he also broke his back, arm, wrist, lost six fillings and the icing on the cake? He got a hernia.

This came not from any actual description of reality, but from a Cracked.com top six list describing the exploits of rocket tester John Paul Stapp. Stapp survived these injuries. Kuntz, however, died on impact with Tenuta. We regret the error.

Tuesday's Pac-10 Offseason Roundup reported that senior USC linebacker Rey Maualuga was being held without bail in a West Virginia detention facility after being charged with biting a twelve-year-old girl's arm in a Wal-Mart. Megan Templeton was, in fact, stung by a scorpion that had stowed away in a shipment of watermelons. We regret the error. 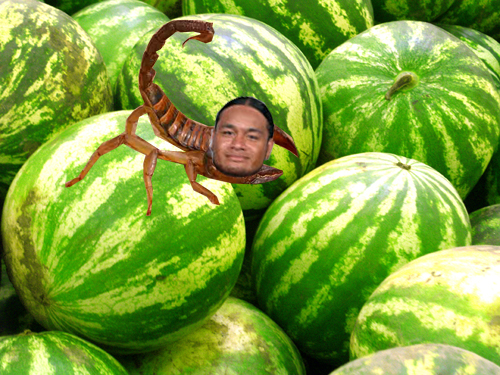 Monday featured a "Halcyon Tussles of Too-Recent Yesteryear"
segment on the combatants in the 2003 Iowa/Iowa State game. In the report, we listed the weather in Ames as "overcast with scattered showers and hovering in the high seventies." This was inaccurate; as several readers pointed out, the usual all-season conditions in Ames involve "biting daggerwind laced with ribbons of pissfire, a rain of burning slagshit, and periodic storms of boulder-sized burning balls of yak hair tumbling from the angry, indifferent heavens." Thanks to reader Ted for pointing this out and providing the vivid description. We regret the error.

In Monday's Where Are They Now feature, former Michigan linebacker Pierre Woods was inaccurately quoted as saying he intends to seek a job in broadcast journalism after retiring from professional football. Woods is in fact intent on pursuing a literary career and will self-publish his first book, A Children's Treasury of Side-Boob, in September. We regret the error.

On Thursday, we reported that Phil Fulmer placed fourth in the money stakes for the King Crab season on this year's The Deadliest Catch. This was inaccurate, as Fulmer performed better than that, finishing second, especially impressive since he catches and holds his crab-haul without the benefit of a boat. Corrected standings follow.

On Wednesday this publication mistranslated an Agence France-Presse story on the spread of hepatitis and HIV in Iran. The Iranian government blames the country's skyrocketing narcotic addiction rates on "the common border with opium-producing Afghanistan", not "Bobby Petrino". We regret the error.

On Monday, we reported that Auburn's Sen'Derrick Marks had turned down the opportunity to be the cover story for SI this fall. This was incorrect; in fact, he has already agreed to the profile, and has completed his photography for the cover. Marks: just wants the chance to roam free with dignity.