WE ARE UNDER WAY, BABY: PROGRAMMING NOTES/SNACKY TIDBITS

Share All sharing options for: WE ARE UNDER WAY, BABY: PROGRAMMING NOTES/SNACKY TIDBITS

ONE. Herr Swindle is headed to Draft Day, baby. He'll be the one they're not taking alive. Suggestions for fauxhawk disguises/Jets fan repellent methods in the comments, if you please. 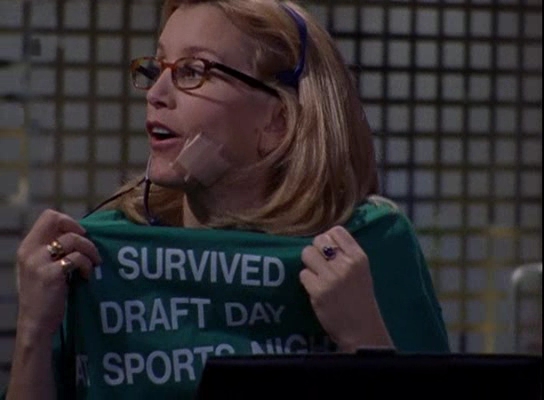 TWO. This snapshot of the 2001 'Canes O-line from, of all places, the Grey Lady. Few things amuse me quite as much as reading anthropological dissections of college sport:

Most of their teammates refuse to be seen in public with them. They refer to themselves as ''animals.'' Their coach, Larry Coker, calls them ''scary.'' They're ''weird, off the wall, the most politically incorrect people I've ever met,'' says Ken Dorsey, the team's laid-back quarterback, with a sly grin. ''I try not to let my girlfriend near them..."

They helped turn Dorsey, a smart, self-possessed quarterback with limited physical skills, into a Heisman Trophy candidate. (The award was won by Eric Crouch of Nebraska.)

Read on, campers read on; there's so much more.