By Holly, who reminds you that when the zombie war comes, machetes do NOT need reloading.

Their names were shouted in exultation or bellowed in impotent rage across the SEC in 2007. You know their stats by heart, lived and died with their triumphs and tears. But in this age of bioweapons and nuclear experiments gone horribly awry, there are more important matters to ponder; namely, how each of these college football notables will aid your survival when the wrong red button is pressed and the zombie hordes rise to enslave us all. You'll need the best of the best (SEC speed = fast zombies). The essential personnel: 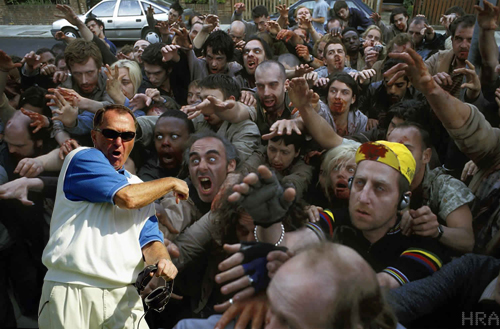 Rich Brooks thinks the undead hordes are bullshit. This will not save him.

The Buffoon Who Got You Into This Mess: Michael Henig, QB, Mississippi State
How He'll Save The Day: When jumping from rooftop to rooftop to reach the river/gun store/barricades, will carry the season to its logical conclusion by mistiming the flinging of his own form and being intercepted, so to speak, by a less than sturdy awning. As he is tugged with agonizing slowness from the canvas, the undead hordes will fall upon his flesh, allowing you to escape.

The Decoy: Blake Mitchell, QB, South Carolina
How He'll Save The Day: Will be assigned as lookout while the rest of the party stocks up on ammunition/canned goods/fuel, and upon seeing an approaching zombie attack party, will inexplicably fancy himself a hero and run outside, waving his arms and capering about to distract them long enough for our heroes to lock and load and hop into an appropriately sized truck. The undead hordes are not amused by dancing, and will fall upon his flesh, allowing you to escape.

The Cloyingly Self-Effacing Hero: Erik Ainge, QB, Tennessee
How He'll Save The Day: Sneaking past the gibbering masses in the dead of night, will slip on a discarded shotgun shell and break both legs in the fall. Will implacably insist on not being carried because He'll Only Slow You Down, and will accept no comfort---but does gather all remaining grenades. After the explosion, the hordes will fall upon his flesh and the flesh of their shredded comrades, allowing you to escape.

The Hothead: Knowshon Moreno, RB, Georgia
How He'll Save The Day: With tears in his eyes and an unearthly battle howl in his throat, by completely losing his shit and barreling into the penultimate wave of zombies at full force, ripping and tearing their limbs with his bare hands. A valiant effort, but the thing about zombies is there's always Just Too Many. The undead hordes will fall upon his flesh, allowing you to escape.

The Shrewish Love Interest: Colt David, K, LSU
How He'll Save The Day: After spending the entire ordeal displaying gradually more obvious signs of crumbling and generally slowing everyone down, will drop to his knees shortly into the sprint over open ground to safety, wailing that It's Hopeless and We'll Never Make It. The undead hordes will fall upon his flesh, allowing you to escape.

The Cheap Shot You Don't See Coming: Kyle Jackson, S, Florida
How He'll Save The Day: As you stagger over the final hill between your sleepy little borough and the haven of the convenient nearby military base/open sea/arms of Orgeron, will burst inexplicably into flames and fall in a shrieking, ineffectual heap at the crest of the ridge. Cold and raw or sizzling in the skull---brains is brains is brains to a zombie. The undead hordes will fall upon his flesh, allowing you to escape. Fade to black. 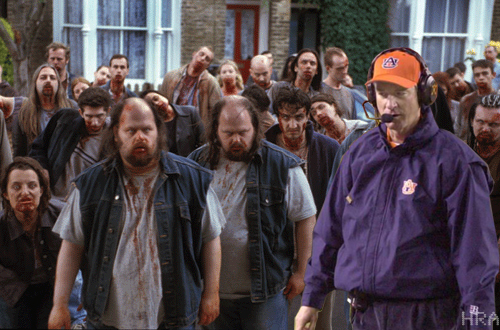 T-Tubb, if he can get his boys to aim those chop blocks at the neck, might stand a chance.