THE JOB INTERVIEW: TENUTA AND WEIS

Share All sharing options for: THE JOB INTERVIEW: TENUTA AND WEIS

Scene: Charlie Weis' office in South Bend, Indiana. Weis is about to hire Jon Tenuta as defensive backs coach and assistant coach, but wants to see the goods first. If he can ever get off the chirp...

Weis: (talking into Nextel) "Reg, seriously, I will take that under consideration."

Nextel: (CHIRP!) "Seriously, Charlie. No one's run the wishbone in years! It'll be Greek to everyone, and Clausen will love it!"

Weis: "Sure, Reg. Sure. I'll take that very carefully into consideration. Now if you'll excuse me, I have an interview with--"

The door flies open. A large man with gray hair, a wild look in his eye, and an ill-fitting grey suit stands in the doorway. Jon Tenuta enters carrying the shoulder of a fly-ridden deer carcass and a play book.) 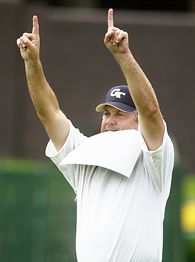 Tenuta: YOU CALL NUMBER ONE TAH-NOO-TAH?

Weis: Yes. We're looking for a new defensive backs coach, and possibly someone to help give some more bite to our defense. I called around, and your name seemed to come up quite a bit.

Weis: Did you...did you kill that your self?

Tenuta: NOT THIS TIME. BOUNTY OF HIGHWAY KEEP TAH-NOO-TAH FED AND HAPPY TODAY.

Weis: Well, that's....anyway, I wanted to ask you a few questions. Talk about defensive philosophy and what you'd suggest we do to make our defense even better than it was last year.

Tenuta: YOU NEED GET WHITE SAFETY OFF FIELD OR MAKE BLITZ!--

Weis: --yes, yes, well, he's graduated, and Tom did a lot of good things for our football team.

Weis: Um, perhaps you could show me what you would show and do against an Ace, 2-tight formation, Jon?

Tenuta: TAH-NOO-TAH NO SCARED! ME BLITZ! Nextel: (CHIRP!) Charlie, have you thought about getting the guys to train with this new Wii Fit thing they've got now? My grandkids just love it, and even Joy and I have gotten into it. I've lost three pounds just messing around with this thing! Imagine what it'll do for Clausen--

Tenuta: YOU WANT ME SHOW OTHER SCHEME?

Weis: Sorry about that. Yes, please show me an I formation set-up, and how you'd line up against it. Weis: Again, aggressive. I like it. Now, for recruiting. If I want you to describe your philosophy about recruiting--

Nextel: (CHIRP!) Charlie, this is Regis. How about those PowerBands I've seen? Feldman's been using them, and he's ripped. RIPPED, I TELL YOU! For a gay producer, that is, but still-- Weis: Again, very aggressive, Jon. I like the way you think.

Weis: No, um, thank you. Speaking of, would you like to eat-- Weis: Agreed. Tony's subs it is. Let's go and work on the details of your hiring.

Weis: No, no more bounty of the highway for you. We'll pay you in money.

Tenuta: HAPPY YOU HAVE MADE ME FAT MAN.

Weis: Glad to have you on board. And just leave the rest of that deer thing here on the floor. Phyllis will clean it up.

Tenuta: TAH-NOO-TAH TAKE WITH FOR SNACK. (Flies buzz around the deer.)

Weis: Fine. Just save some for me!

Weis: I'm just kidding. Even I'm not touching that with a ten-foot pole, man.

Weis: I'm taking that into consideration, Reg. Off to lunch!

Nextel: (CHIRP!) The Baked Lay's this time, Charlie! The baked ones!