Share All sharing options for: JUNES JONES: THE INTERVIEW

How the hell does Hawaii's coach end up sitting in Dallas today? We have answers. 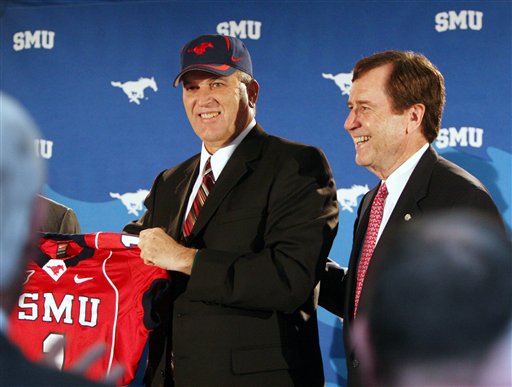 We have inside information. Read along.

(Scene: a nattily dressed man with a bourbon gut enter the room from a hidden door. Visible through the door: a bed with silk sheets streaming off it and onto the floor, a woman's naked legs seen to the knee. Ed "the Scrapple King" Pestara zips his expensive pants.)

Ed: Hey, baby. Don't clean up. I like you walking around smelling claimed. Other men smell it on you like monkeys and back off. Or like Meerkats.

Woman, from the other room: Okay, King.

Ed: And stay out of here while the men are talking. Take the back stairs and go buy yourself a smoothie. Low-carb, though. I don't want you gettin' cottage cheesey on me.

(Ed's secretary pops her head in the door. She is a stunning Latina with a skin-tight black skirt on and a white oxford shirt open down to ample cleavage.)

Secretary: Coach Jones is here to see you.

Ed: And when we're done...you feel like playing a little border patrol, senorita?

Secretary: Only if I get to turn the tables on you this time. When you're on my side of the border, it's strictly Mexican rules only.

Ed: I'll charge the taser, then. Send him in.

(June Jones enters. He is wearing a cowboy outfit complete with chaps, bandana, and a pair of boots with spurs. Plastic six-shooters sit in the holsters of his gunbelt.)

Ed: Well, aren't you native! Where'd you get that rough trade getup? If you wore that down at Bamboleo's you'd be swimming in Cosmos and unable to sit right for a few weeks. Jesus, I'm craving dick standing next to you, Brokeback.

June: I thought I'd just go...native, that's all. They liked it at Hawaii.

Ed: Well, I appreciate the effort, Cockalong Assidy. Have a seat, if you can. Now, tell me why I should spend some loose change like a few million bucks on some run 'n shoot freak exiled to Tropical Bananaland Spamalot.

June: Because I'm exciting. And I like to...have...fun. Lots of exciting fun.

Ed: Like getting Lucky Pierre'd over a sea turtle by the natives under the glow of torchlight? I almost shouldn't hire you just for that outfit. Show me. I'm a show me kind of guy. My people have to show me what they've got. Watch. Luisa!

(She does. They are indescribable.)

June: She'll do that? Anytime?

Ed: And more, but only for the King here. Oh, and Luisa: did you ever get a message from Hussain about those oil hedges ?

Luisa: He says he can't back the 175 a barrel. It's just too risky for his blood.

Ed: You tell him that if he ever wants his son with the 340 SAT score, no English, and a fondness for sexual assault to ever spend five to seven of the best years of his life with his face jammed in piles of the nothing but the best Texan eel-skinner, he's gonna have to back that hedge and back it like he means it with every dinar he's got. I'm trying to make that carpet pilot rich and get his son a sprained dick every night, and look what he's giving me! A load of hot camel shit, that's what.

Luisa: Does he work here yet, sir?

Ed: I ain't decided nothing yet. Show him one. You get the other one if you impress me in the next three minutes, Rough Trade.

(Luisa flashes one. It is indescribable.)

Ed: She's great. Can skin a mule deer and have it grill-ready in 18 minutes, too. That's the kind of people I like around here. So what you got?

June: Well, I have a powerpoint presentation to show you...

Ed: Fine. I'll look at 'em, and then you can go tackle a rugby scrum of pillow-biting cowboys down in the gayborhood before you get your ass out of here.

Jones: (swallows nervously.) Well, if you'll see here, this is how my predecessor might line up against a standard 4-3 front. Ed: I played at SMU, Jones. I know what the I-formation is. I have a loaded gun in my hands, and it goes off when I'm bored. And I'm getting perilously closed to uninterested, a little neighborhood just three blocks over from bored-town.

June: I know. You were the one who murdered Jerry Glanville. Ed: Damn. Is that even legal? I mean, can you even do that on a football field?

June: If five of those guys are linemen. I plan to use all nine as receivers, though.

Ed: Now that's what I'm talking about! (Fires gun into ceiling.) Innovation, son! Can you even do that, though?

June: There's only one way to find out, sir. Hire me and we'll see.

Ed: I'll be damned. You got me, Spunky Brewster. I like visionary shit, Jones. You're my man. Care for some scotch?

June: No thank you, sir.

Ed: Scotch made with blow? Some scotch-scented cocaine? You see, you have to smell it to get the scotch aroma, and when you do, WOOO! It's all the way up to Bonerland, Jones!

Ed: Spectacular. I'm gonna take a little of all three and Luisa in the back room. Care to join us?

Ed: Get plowed by a body-dysmorphic personal trainer bean queen with a meth problem and fake tanner? You go right ahead. We accept everything but losing here at SMU, even pickleticklers with a home on the range fetish like yourself.

(She does. It is indescribable.)