BOWLD AND THE BEAUTIFUL: THE QUICKIE VERSION, SCHNELLENBERGER-STYLE

Share All sharing options for: BOWLD AND THE BEAUTIFUL: THE QUICKIE VERSION, SCHNELLENBERGER-STYLE

The Bowld and the Beautiful brings you previews of wildly variant quality throughout bowl season. Tonight, the lowest quality review will be reserved for tonight's New Orleans Bowl, which we're previewing just to have an excuse to put Schnellenberger's pic up again.

All you need to know...has already been written by this man over at SMQ. So don't bother with this space, as we've already started drinking.

But... Tune in for at least three seconds of the game just to get a whiff of the bourbon-fueled dapper sex-god himself walking the sidelines: Howard Schnellenberger, who built the Miami and Louisville programs and yet could walk into a room full of college football fans and not get pulled aside for so much as a "dude, that 'stache is bomber, man." Criminal, we say--that's the equivalent of letting Richard Feynman walk into a physicists' convention and not asking for a single autographed equation. 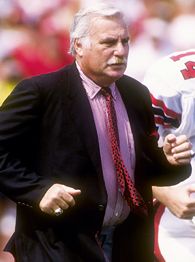