Share All sharing options for: TIM TEBOW WINS HEISMAN, IS CONDEMNED TO MEDIOCRITY

Tim Tebow won the Heisman Trophy this Saturday in New York, an award all but ensuring an end to his lifelong streak of athletic excellence.

"First, I'd like to thank my Lord and Savior Jesus Christ for this award, and for giving me the gifts I enjoyed for so long. Before the awards tonight, I said that you never know when your ability to play the game of football could be taken away from you."

"Thanks to the voters of the Heisman Trophy, I know that that time is now." 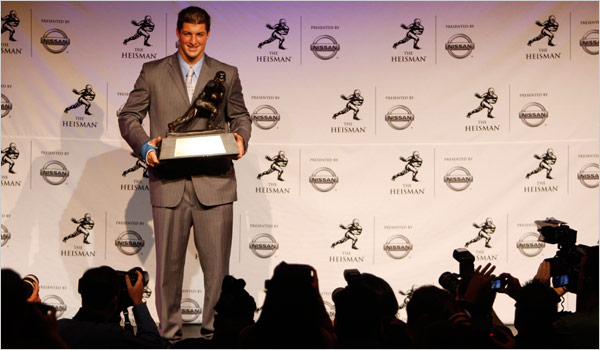 Tebow could only hold the 25 pound trophy for a few seconds before dropping it. He then asked for some juice.

Tebow, who beat contenders Darren McFadden, Colt Brennan, and Chase Daniel for the award to become the first sophomore to win the trophy, said he plans on entering the clergy now that his career as an athlete is done.

"I'll follow the example of my boyhood hero Danny Wuerffel and help those less fortunate by preaching the word and working in the community. It would also really help if I didn't have to throw anything ever again, since I couldn't toss a sandwich wrapper into a wastebasket with any accuracy now. I would also appreciate not being jostled or bumped."

A chorus of chuckles rose from the Heisman voters, who included Troy Smith, Gino Torretta, Chris Weinke, and Andre Ware.

"It's amazing, really, what he accomplished in such a short span of time," said Eric Crouch, calling from his desk at Ameritrade Omaha. "Excuse me, I'm still at work, and putting the phone down is a complex task I used to perform like it was nothing...but that was before I won the Heisman, of course." The phone clattered for several minutes before the phone call with Crouch ended.

Tebow's campaign was, by any measure, an astonishing one: he became the first player to run for 20 TDs and pass for 20 TDs, and averaged an amazing 4.25 TDs a game. Yet even at the ceremony, the rapid dimunition of his physical powers became apparent. See this exchange between Chris Fowler and Tebow:

Fowler: Hey, are you sure you can pick up that trophy with one hand?

The well-adjusted Tebow is expected to deal with the change, but past Heisman winners still offered their advice to him as he left the stage.

Charlie Ward: "I blame the Jews for my weakness, along with the ice-cold 2-18 shooting of John Starks in game 7 of the 1994 NBA finals."

Ricky Williams: "I'd do some yoga, and perhaps some colonic therapy. Oh, and weed. Dude, he's got to get some weed of the dankest and ickiest kind, and smoke it till his eyebrows fall out. That helps a lot."

Jason White: "Buy more knee oil. You can never have enough of that stuff."

Matt Leinart: "He should settle down and have a family, you know. It takes virtually no time off your hands, and when chicks hear you have a baby their panties practically evaporate."

O.J. Simpson: "I suggest golf...AND DOUBLE MURDER!!! Ha, ha, I'm just kidding. I'm not, actually. I totally killed two people, and I'm not even a war vet or anything. They just let me walk around and shit. It's UNREAL. Leinart! You said you want Warner done? Okay--I think I can get to him next week, but that's pushing it. I'm swamped, dude."

The only two-time winner of the award, Archie Griffin, was unable to comment for this story. Griffin has been on bedrest for 32 years following the awarding of his second trophy, after which he became so weak he could not stand or feed himself. He is said to be happy for Tebow and is also extremely fond of a nice, warm bowl of nutritious chicken broth.

We at EDSBS obviously congratulate Tim Tebow for being so undeniably awesome that even the cataract-eyed Heisman crowd gave him a meaningless award. Darren McFadden, Colt Brennan and the 37 year-old Domino's Manager living the dream known as "Chase Daniel" also deserve congratulations for attracting the attention of the madding crowd. Badass needs no shiny endorsement, though, as Vince Young will be happy to show you on the day of your choosing.