PEOPLE OF NEBRASKA, PLEASE DO NOT KILL YOUR COACHES

Share All sharing options for: PEOPLE OF NEBRASKA, PLEASE DO NOT KILL YOUR COACHES 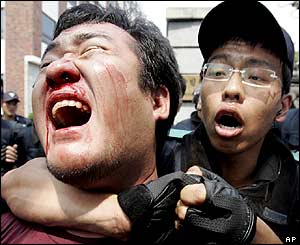 I have tried to be polite. Now you must die.

One incontrovertible rule of social dynamics is this: the more polite a society and the more structured it is, the more violent someone in said society will be once they snap. Take your average Japanese man placed under a varying amount of stress.

Stress level one, punched in nuts once: "I'm sorry. I'm so clumsy to run into your fist like that."

Stress level two, punched in nuts twice: "There I go again! Can I purchase a soft drink to smooth this rift between you and me?"

Stress level three, punched in nuts three times: "Oh, how funny! This is getting comical now. Let's duck into this stall and enjoy some delicious teppanyaki and discuss our families and fortunes together."

Stress level three, punched in nuts four times: "AAAAIIIIIIIIIIIIGGGGGHHHHH!!!!!!" (Stabs you to death with a thumbtack before paying to have your body shot into the sun.)

This seems to be the rule in Nebraska, a polite, farm-raised society of heartland folk who when pushed will be perfectly nice...right up to the point when you allow 76 points to Kansas in one of the worst losses in history. Then they threaten to toss you in a thresher and feed you to the cattle where you will never be found.

The caller, according to the warrant, left messages in which he expressed anger about the Jayhawks scoring 76 points against the Cornhuskers.

Oh, dear, that's impolite. Given the admitted tide of nastiness washing into Cosgrove's voicemail inbox over the past week, this must have sounded horrifying, like the ghost of Michael Ironside calling from deep in a well wearing a red Huskers' ski-mask. Either that, or Tom Osborne had Solich call in from an untraceable satellite phone outside of Athens, Ohio after a few margaritas.