Share All sharing options for: VIEWER'S GUIDE, WEEK TEN: DOWN THE STRETCH

Two months in the can, one to go, folks, before 2007 is a misremembered, revisionist fog. Get every bit you can while you can. That is an order (Nevada-New Mexico State optional):

Remember the good times? There’s nothing keeping you away except you and your dignity.

FRIDAY NIGHT LIGHTS
NEVADA at NEW MEXICO STATE (8:00 ET • ESPN2)
It’s a WAC game of no consequence whatsoever, even by WAC standards – both teams are eliminated from the conference title picture – so why not have one of those 59-57 barrages? It should be a law, really: the number of punts in any televised WAC game shall be no greater than the combined number of I-A wins between both teams. In this case, that’s five. Watch For: Admit it: you miss Hal Mumme, don’t you? It’s okay: it’s Friday night, it’s in New Mexico, it’s ESPN2...he won’t tell anyone.

SATURDAY – EARLY AFTERNOON: THERE IS A BODY. DUMP IT IN THE RIVER BEFORE...

Main Course: PURDUE at PENN STATE (Noon ET • ESPN)
It’s a virtual lock the winner here will be in one of the Florida bowls on New Year’s Day, which says nothing, really, except that there will be some really sketchy quarterbacking on display in January. Do not be fooled by Purdue’s "high-powered" offense, which has tended to find the deepest hole it can find against competent defense for the last three years or so – the Boilers were averaging 30 points before they were shut out by the Lions in West Lafayette last year. Watch For: Flashing back to his duty in the final days of World War II (this is true), JoPa mistakes the "bombs" Curtis Painter is spraying around the Penn State secondary for that agonizing night in the leaning shells of old farmhouses outside Bondeno in '45. Massacre ensues.

On the Other Channel...
IOWA at NORTHWESTERN (Noon ET • ESPN2)
One of these teams currently has a winning record. Can you guess which one? I didn’t think so. Watch For: Iowa quarterback Jake Christensen, coming one of the truly, stunningly horrible performances in the history of winning football after last week’s double overtime win over Michigan State. Christensen completed three passes in regulation for 24 yards, but didn’t throw an interception, which is like the quarterbacking version of playing dead. It’s all about adapting and surviving, man, adapting and surviving.

NEBRASKA at KANSAS (12:30 ET • FSN)
The Callahan Death Watch limps into its final excruciating month in need of a good mercy killing: at 4-5 with three games to play, Nebraska is technically alive for a bowl game, even with a defense that just gave up 319 yards rushing at the Beaver Crossing First Presbyterian bake sale and a first time starter at quarterback. At some point, backups can only provide a spark – you know, the team can hardly play worse under Joe Ganz – but he’ll be a minor here if the ex-Blackshirts are competent enough to cover the 20-point spread. Watch For: Last week, it was the velour track suit. This week, Mangino goes for the lucky lederhosen.

(A brief word to the Big Ten Network: I understand your contractual obligations to get teams onto BTN a certain number of times, but fuck you for picking up Wisconsin-Ohio State and sticking the rest of the country with Iowa-Northwestern. This is quite the boon a wounded conference was looking for, I’m sure, hiding a mythical championship contender in one of its three marquee games of the season on a regional network while trotting out the play-in game for the Music City Bowl for everyone not living next to a Great Lake. Or is it better voters not actually see Ohio State in its only pre-Michigan game worth watching? Go to hell. And if you don’t live in the Big Ten zone and you’re getting Wiscy-OSU by some means other than basic cable, you go to hell, too. We don’t want to hear about your fucking packages.

Main Course: LSU at ALABAMA (5:00 ET • CBS)
Bizarre start time for the Eye, about an hour and a half later than usual, all the better for the fan base that mobbed its new coach’s private plane and showed up 90,000 strong for the Spring game to get in that extra flask before filing in to its seats violently storming the gates to sate the entitled bloodlust that’s possessed the blackest corners of its soul since last December. This game could mean more, if both teams were undefeated or something – in SEC play, anyway, both are only an overtime loss away from 5-0, and a wild last minute drive from being 3-2 – but between coonasses, fucking rivals and the division title, there is epic theater in the works. Watch For: Well, damn, even Nick Saban has time for this shit. There are wilder environments than Bryant-Denny, but with an infusion of revenge and bourbon-filled Louisianans, under the circumstances, it should be transformed into the unpadded batshit madhouse of the season.

On the Other Channel...
Your Mouse-Eared ESPN on ABC Overlords Present...Regionalism!
CINCINNATI at SOUTH FLORIDA or MICHIGAN at MICHIGAN STATE or TEXAS at OKLAHOMA STATE or UCLA at ARIZONA (3:30 ET • ABC/ESPN) 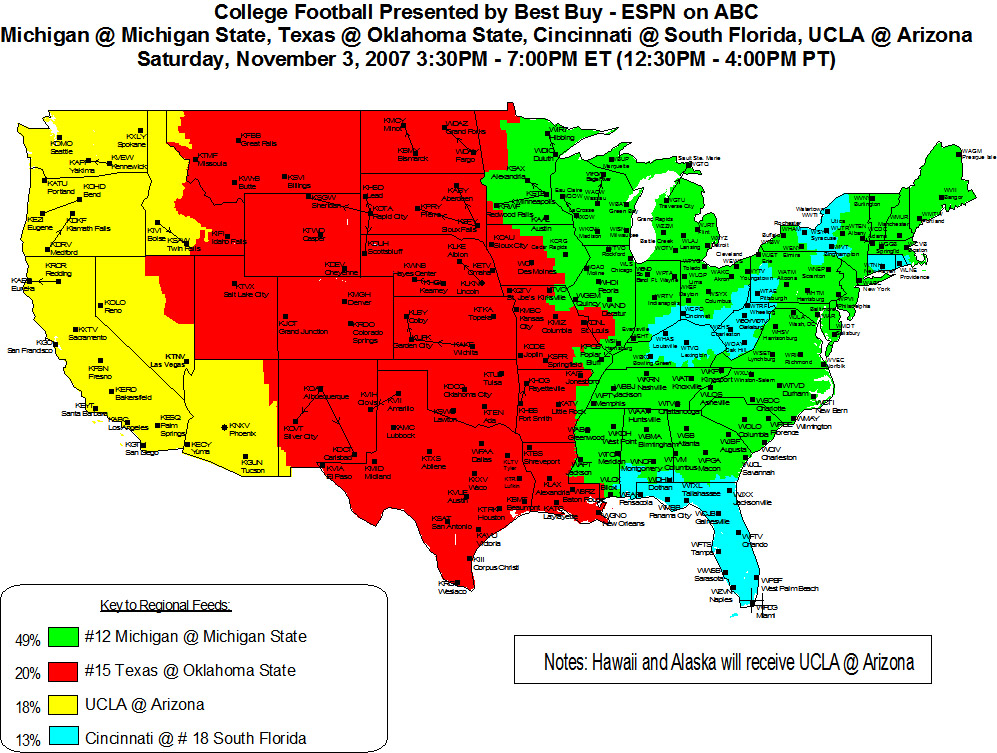 One way or another, most of the country will be seeing Michigan-Michigan State, which is good and right: a legitimate, hate-filled rivalry between decent teams, neither of which is UCLA nor Arizona. The programmers guessing at the beginning of the year that Bruins-Wildcats would be a better draw for this slot than Devils-Ducks should be summarily sacked – Arizona? – not that anyone off the West Coast would be able to see the latter under these conditions, anyway. It probably worked out for the better, actually. Great job, guys!
Watch For: One of your last chances to see Chad Henne and Mike Hart as Wolverines. Truly, through the decades, they have been the voice of an entire generation.

NAVY at NOTRE DAME (2:30 ET • NBC)
Whatever the losing streak is now, 40 games, 45 games, this is it for Notre Dame. The last possible shred of respect it can salvage is to win the frosted dessert course of its schedule (in November, the Irish get Navy, Air Force, Duke and Stanford) beginning with the Middies, if for no other reason than to say "At least we didn’t lose to Navy" and avoid another billboard advertising this team’s historic futility. Watch For: Unparalelled potential for schadenfreude, and because you love the triple option, don’t you, seaman?!

THE WILD CARD
ARIZONA STATE at OREGON (6:45 ET • ESPN)
Even the most cynical hats must be doffed to the Leader for saving the game of the day from regional oblivion, even if kickoff here is inconvenient for anyone more interested in LSU-Bama. The second half of this one ought to get much better ratings than the first. Watch For: If it’s not enough of a draw to watch two high-scoring, top five teams hook up with the highest conference and national implications and coaches who are liable to stagger in as sloshed on the Nike dime as the Sig Eps in the stands, at least give a fair shake to Dennis Dixon, the most overlooked candidate for certain unnamed statuettes. Oregon has to remain a national contender for his campaign to gain any traction, and vice versa.

Almost two-thirds of households nationally will see Matt "Roller Coaster" Ryan try to keep his lunch down against Florida State, while viewers attempt to keep their own lunch down watching the ‘Noles’ pathetic attempts to execute anything on offense. Even FSU’s lone interesting player, Xavier Lee, has succumbed to a sprained cerebrum, leaving vanilla Drew Weatherford to fail in far less spectacular fashion. Just for the record: does anybody else get the sneaking sense that, if their teams and coaches were reversed, Drew Weatherford and Matt Ryan are pretty much the same quarterback? Watch For: Independently, DeMarco Murray and Dennis Franchione’s tortured attempts at stoicism in defeat are worth the price of admission on their own. So a certain segment of the country is getting a sweet two-for-one. It’s like Christmas.

On the Other Channel...
MISSOURI at COLORADO (6:40 ET • FSN)
There’s no figuring Colorado out: the Buffs lose at home in the middle of the night to Florida State, then take out Oklahoma on the same field, then get routed in back-to-back games by Kansas and Kansas State, and, reeling in the wake of Sunflower State smackdowns, salvaged the season by whipping Texas Tech last week in Lubbock. Division I football, brother: completely schizophrenic. Watch For: Chase Daniel, who, no, you have not observed closely enough. Everyone has Mizzou figured, but nobody’s doing much about it.

SOUTH CAROLINA at ARKANSAS (8:00 • ESPN2)
It feels like both teams are reeling, but, where South Carolina’s lost two in a row, Arkansas has actually won four of its last five. The problem: those four were North Texas, UT-Chattanooga, Ole Miss and Florida International. Against actual SEC opponents, the Hogs have fallen flatter’n Houston Nutt’s denials re: Donna Bragg. Watch For: Any chance to watch Darren McFadden knife through hordes of tacklers is a precious one, and by all reasonable guesses, this will be one of the last you’ll get on a Saturday.

WASHINGTON STATE at CALIFORNIA (10:00 ET • FSN)
Random Pac Ten game! Random Pac Ten game! Less than a month ago, Cal was ranked third in the country and thinking national championship. Now the Bears are trying to hold on against streaking Wazzu (one in a row, baby!) to avoid a tie for ninth place in the conference. Watch For: The sheer, drunken, bleary-eyed pleasure that comes from falling asleep for whole quarters, then waking up just in time to catch a bizarro finish and trying in vain to remember just which team you bet on, again, before passing out for good. It’s the little things that make it all worthwhile.

Don’t forget to set your clock backs at the end of Cal-WSU, and enjoy that little time warp while you can.