VIEWER'S GUIDE, WEEK EIGHT: RESIGN FROM YOUR FAMILY TO SPEND MORE TIME WITH THE SEC

Share All sharing options for: VIEWER'S GUIDE, WEEK EIGHT: RESIGN FROM YOUR FAMILY TO SPEND MORE TIME WITH THE SEC

Guest editor Hannibal Montegna with the weekend in televised mayhem:

Southerns think the world revolves around SEC football every day of the week, and for once, they’re right. Saturday serves up three must-see SEC games that easily dominate their respective time slots: Tennessee-Alabama early, Florida-Kentucky in the afternoon, Auburn-LSU into the night. This is, literally, your long-awaited chance to spend twelve consecutive hours with half of the Southeastern Conference. Just remember: even if you make it through this most gruelling tour of the league, you’ll still be a full two teams behind Jenn Sterger’s half-day record.

Six teams from the same conference in one day? I signed up for a challenge!

LOUISVILLE at UCONN (8:00 • ESPN)
After losing 17-16 to Virginia last week, the Huskies are one point from a winning record. Louisville is only about sixblown assignments in the secondary away from 6-1. Watch For: Brian Brohm – for all the defensive woes, with his back against the wall at every turn all season, is still the best passer in the country.

SATURDAY – EARLY AFTERNOON: THERE IS A NEW RADIOHEAD ALBUM. FOR FUCKING FREE. DOWNLOAD THAT SHIT BEFORE...

Main Course (SEC Only): TENNESSEE at ALABAMA (12:30 • Lincoln Financial)
CBS apologizes, nation, but golf or kids’ shows or local infomercials or whatever it’s showing at noon Saturday (whatever it is, you won’t find it on the network’s primetime only schedule) is worth more to it than shuttling a pair of announcers down to Tuscaloosa for one of the best secondary rivalries in the SEC (that is, between teams with other primary rivalries, not between their respective defensive backfields. Not that that a slap fight between Simeon Castille and Jonathan Hefney wouldn’t be more interesting than Mr. Popiel or the ubiquitous Orange Clean guy). The immortal Daves get to flub their way through a non-snoozer for a change, their homespun, aggressively lo-def incompetence again enthralling a region; for the rest of the country, the joys of the SEC – that is, endless redneck jokes depressingly reinforced by crowd shots – are reserved for Gameplan subscribers only. Watch For: Spills! Chills! Impending medical bills! From the man who brought you Gainesville ‘05, Baton Rouge ‘05 and Gainesville ‘07: The Reckoning, it’s Erik Ainge on the road!

On the Other Channel...
PENN STATE at INDIANA (Noon • ESPN)
Indiana’s only national appearance will bring out the weepy angles for fallen coach Terry Hoeppner, only amped up by the 5-2 Hoosiers’ emotional quest for a bowl game and the sobering contrast of Zombie Joe across the way, who will never die. Watch For: Indiana quarterback Kellen Lewis, a lankier, more accurate version of Juice Williams: he leads the Hoosiers in rushing while also sporting a 30:13 career TD:INT ratio, even if defenses of Penn State’s caliber have tended to leave him curled up in a defensive ball. 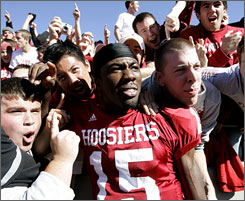 IOWA at PURDUE (Noon • ESPN2)
Two weeks ago, these two teams’ stocks were rocketing in opposite directions, with the Hawkeyes getting waxed at home by Indiana and Purdue enduring the second half onslaught of Notre Dame’s lone competent offensive outburst of the season. I think that sentence speaks for itself. Watch For: Defenders in the trail position for three straight hours. Iowa looked terrific against Illinois’ option game, which presented little downfield passing threat and failed in the fine zook tradition to line up properly on the one instance it connected on the long ball, but Curtis Painter and Co. offer no such luxuries. On the other side, Purdue’s defense is Purdue’s defense. Also: Pam Ward, natch.

(Aside on Ward. I just want to note that this article from the Washington Post in March praises her dutiful trailblazing in the booth, then includes this line:

One of Ward's biggest fans is Mike Patrick...

This explains so, so much.)

OKLAHOMA at IOWA STATE (12:30 • FSN)
OU transitions from Texas and Missouri to...Iowa State, which provided fodder for Texas’ second half comeback narrative in a 56-3 smashing in Ames last week. Only five more years to go until ISU celebrates a solid century since its last conference championship, a tie for the 1912 Missouri Valley title. As a grandson of a now-deceased alum who wasn’t even born then, I’ve already RSVP’d: washing my hair that night... Watch For: The best team in the Big 12 against the worst. What could be more exciting?

LATE AFTERNOON - BUSHY. WET. NOT AS FUN AS IT SOUNDS.

Main Course: FLORIDA at KENTUCKY (3:30 • CBS)
Kentucky shouldn’t have to prove anything at this point, really, and even though it probably does for the stubborn minds who still think "Scoreboard: TILT" when they see the Wildcats, this is the worst time for it to do the provin’. Auburn, Florida and LSU can all attest this season: you don’t want a tough game in this league the week after playing in a tight, physical battle of wills. Especially when, like the Wildcats last week and UF Saturday, the opponent’s had extra days to rest/prepare. Watch For: Tebow vs. Woodson: thoroughbreds in the Bluegrass State. Get it? Seriously, Tebow took Show behind Street Sense in May. He would have won, but he was late out of the gates for anointing a wayward mare with oil after he converted her and delivered her healthy filly after a torturous labor. Little Off Tackle Left is gonna be a champion some day...

On the Other Channel...
MIAMI at FLORIDA STATE / MICHIGAN STATE at OHIO STATE / CALIFORNIA at UCLA / TEXAS TECH at MISSOURI (3:30 • ABC/ESPN2)
ABC’s regional option will send most of the country to Michigan State at Ohio State:

Gaze upon your fate.

...and thus will also bear witness to the flashing neon upset bid of the day, brought to you by Allstate and AFLAC, who remind viewers to ignore the other one. Watch For: Javon Ringer, DeSean Jackson, everything about Texas Tech (especially the outrageous line splits) and...and...for the first time in my life, I can’t think of a reason to watch FSU and Miami. The East Coast always gets screwed with the ACC matchup.

SOUTHERN CAL at NOTRE DAME (3:30 • NBC)
By all rights, USC should win this game by at least nine touchdowns on its worst day, in the rainiest, most unkempt field conditions, with any of its blue chip golden children playing quarterback. The fact that I don’t have any confidence in the Trojans to win this by more than, say, 17 points is an indictment to just how lackluster they’ve been. Watch For: Grass so tall, bushy and wet, USC’s entire team will wonder how Paris Hilton ever managed to get inside a Catholic facility. Also: I’m so legitimately down on SC, it feels like it’s time for one of those "Magical Afternoons" every bad team gets against a good one. That’s not a "winning afternoon," mind you, but it is probably an interesting one. For a while, anyway.

The Wild Card. KANSAS at COLORADO (5:45 • ESPN)
South Florida’s demise from the realm of the unbeaten leaves Kansas as the only true ‘Cinderella’ in the field, but that’s only because five of its six wins have come courtesy of Central Michigan, Southeast Louisian, Toledo, Florida International and Baylor. Colorado beat Oklahoma. This is DIVISION I FOOTBALL, BROTHER! We don’t play Baylor! Actually, Colorado does play Baylor – CU won last week in Waco, 43-23 – but you know what I’m saying: when it comes to Kansas, Mark Mangino is fat. Watch For: The off chance, however infinitismal, that Dan Hawkins challenges Mangino to join him on or in training for his half marathon, or better yet, to race around Folsom Field in lieu of overtime. If soccer can scrap its entire game to launch penalty kicks to decide a winner, college football can send morbidly obese coaches on wind sprints. Makes as much sense as putting the ball on the fucking twenty-five.

HERE COMES THE NIGHT – NO REST FOR THE WEARY.

Main Course: AUBURN at LSU (9:00 • ESPN)
Just like Kentucky, LSU has to be completely spent coming in here, off two straight emotional, draining finishes in consecutive weeks, and just four weeks removed from playing South Carolina in another "Game of the Week" atmosphere – this is the fourth time in five weeks the national spotlight is on Les Miles’ Tigers. Tommy Tuberville has a fantastic record against teams ranked this high, but since winning big in Baton Rouge in 1999 against Gerry DiNardo’s last team, he was 0-2 in Tiger Stadium against Nick Saban’s teams and lost to Les Miles’ first squad in overtime in 2005. Only the latter required a team gynecologist to accompany the quarterback on the trip. Watch For: It’s Auburn-LSU, legislatively mandated in both states to end – with all due controversy, where applicable, pursuant to Amendment 7-3-e, aka the "Hodson Clause" – via the most over-the-top melodrama possible. This is usually one of the five or six best games of the season: the last three have been decided by a combined eight points.

On the Other Channel...
MICHIGAN at ILLINOIS (8:00 • ABC)
Michigan thinks it’s back after thwacking Purdue in the Wolverines’ venerable Purdue-thwacking tradition, but we don’t really know until we see the allegedly rehabbed M defense get back in the water against the athletic, spread option scheme that’s plagued it for years and drove this season to the brink of oblivion in the first two weeks. And I don’t mean just sticking a couple toes in – that’s what Northwestern and Eastern Michigan were for. Juice Williams and Rashard Mendenhall are real. It’s time to break out the cannonball on that shit. Watch For: It’s one of your last chances to see super hobbit Mike Hart as a collegiate. Appreciate his unstoppable piston leg drive while you still can.

VIRGINIA at MARYLAND (8:00 • ESPN2)
Did you know these two teams are a combined 10-3 with wins over Rutgers and otherwise unbeaten UConn? And they’re 4-1 in the ACC after each hung on to beat Georgia Tech in the game’s dying seconds? And the offenses are ranked 108th and 90th in total yards? You didn’t? Would you like to trade lives? I saw it in a Judge Reinhold movie. Watch For: Both teams appear to be committed to a low-risk, ground-based, defense-and-field position sort of offenses, so, you know, there’s always a chance of cutaways to the cheerleaders.