You're going to watch it, anyway, you sick, sick person. However, like the informed observer you are, you're going to watch and enjoy it thanks to our list of eight totally true things, since you've already decided not to go to the gym, spend time with your significant other, or remain sober tonight. Good for you, trooper! 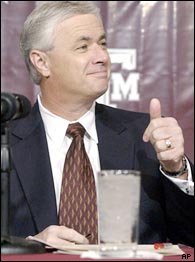 Why, yes, they're leaking right now, thank you very much.

8. Dennis Franchione is under so much pressure his teats leak condensed milk constantly. (This usually requires some firm pressure with a gloved hand. Food safety starts with you!)

7. Up to fifty thousand people to attend, the second largest gathering that night in Miami and the largest not involving muscular chickens with razors strapped to their ankles. Wait, there's a Mets/Marlins game? Okay, third largest, and second largest without the death chickens, okay?

5. Aggie Corps of Cadets could be mistaken for immigration officials, causing thousands in stands to flee in panic.

4. Aggie Corps of Cadets could be mistaken for DEA officers, causing thousands in stands to flee in panic.

3. Aggie Corps of Cadets could be mistaken for Russian Tax Police, causing thousands in stands to flee in panic.

2. Kyle Wright is starting tonight, and will save the groundskeeping crew time and effort by trimming the grass one underthrown ball at a time.

1. 270 pound Jorvorskie Lane will score a diving touchdown. Sadly, the impact will shatter the limestone bedrock of Miami, spoiling the Florida Aquifer and making the city unsafe for human habitation. Unsurprisingly, no one living in Miami will notice this.