Share All sharing options for: MEMO: TO MICHIGAN FANS

We have no words of comfort. For comfort, go to mom, or better yet, Oprah. Or better yet, fire your motherfucking coach once the nadir turns into the midpoint when you lose to Michigan State by thirty, or (Jebus forbid!) Notre Dame next week, or to whomever else would snap the creaky back of the Carr Administration at this point. You'll still suck, but you'll have cut off someone's head--and coachblood makes the wounded fan's heart sing every time.

Instead of comfort, we focus on one seemingly cosmetic but terribly important thing. We watched the Oregon game, hoping to be that Oprah type person: rooting for the downtrodden, pulling for the wounded little meerkat, you know, falling prey to our national genetic predilection for the underdog/comeback kid. And for an instant we were there, until we saw this: 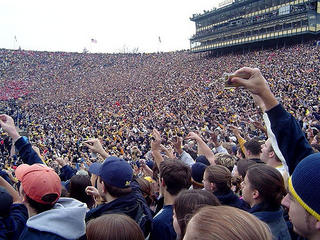 This would be less appalling if it were alumni...but STUDENTS JINGLING KEYS? ARE YOU FUCKING KIDDING ME? Young, healthy people with clean, fully-functioning lungs JINGLING KEYS TO MAKE NOISE!!!! My god, why don't you hire Salvadorans to come yell for you? Or better still, they could just come in and cheer for you while you watch the game in the parking lot in peace and quiet and save you the trouble of screaming "DOWN IN FRONT!!!" (Because that would hurt your lungs, wouldn't it?)

Yes, this is coming from a boorish, decorum-free SEC fan whose fellow fans bring cowbells to games and set off seismometers at the geology department during games in between handing out sociology and leisure management degrees to illiterate, well-muscled athletes. It is also directed at a school in a conference where some schools actually cheer their asses off and force teams into penalties with crowd noise. And some Michigan fans have been railing about this for way, way longer than we have.

Don't blame the architecture either. Instead, scream. At this point, you should be screaming, anyway. Who cares if it's at your coach? Notre Dame doesn't have to know that. This is football. Blood. Screaming. Tribal violence. Bizarre rites and rituals. Put away the keys. Pick up the torches. Less Roman, more Vandal, dammit!