PAC 10 MEDIA DAYS: KEEPING IT SMOOTH, IN A SECESSIONIST SENSE

Share All sharing options for: PAC 10 MEDIA DAYS: KEEPING IT SMOOTH, IN A SECESSIONIST SENSE

Play this to get you in that smooth West Coast frame of mind...

Yeah, we're smooth now. Toto-smooth. Ready to talk about the Pac-10, who's not trying to be harsh or anything when they suggest that they'd COMPLETELY FUCKING BAIL on the BCS if anything resembling a playoff were instituted. Even a "plus one" format falls under this umbrella statement, which isn't a threat, but you know...we're just saying.

(Great rhetorical device there. If you should ever want to say something completely untowards or inappropriate towards someone, just include "I mean, don't take this personally..." and then conclude with "I'm just saying." Congratulations! You've effectively managed to compliment a co-worker's ass without violating HR regulations!)

Hansen also takes the bait laid out by Les Miles by going out of his way to say this, quoted in an LA Times piece by Chris Dufresne:

The Pac-10's national image will change only when teams other than USC start making national noise.

The conference will get plenty of chances this year: Oregon plays at Michigan. Washington plays host to Boise State and Ohio State. Cal, this time at home, gets another shot against Tennessee.

UCLA gets a do-over against Notre Dame; Washington State plays at Wisconsin.

"It's very, very important," Pac-10 Commissioner Tom Hansen said of the matchups. "We have to win games like that."

All true, sure. But we would like to say this to USC on behalf of the rest of the SEC: stop looking at us like that. Here--perhaps try a tasty petit-four we made last night. See? Those are delicious, aren't they? Have another? Now you didn't think we were talking that kind of shit about you, right?* Of course we weren't, now.

The historical parallel popping up in our minds at the moment is the ACC under Florida State, which featured some very good teams (like Mack Brown's UNC squads, O'Leary's Georgia Tech teams, and the moonshot 1990 UVA team that held the #1 ranking for 3 bizarre weeks.) Ed--okay, as Michael points out, FSU didn't join the ACC until '92. Then how 'bout the Barber Brothers mid-90s teams? Not bad. There are good teams, but there's one big lobster clubbing everyone else in the tank into submission. Said lobster is USC, and will remain so as long as Carroll's there.

The other great quote fluttered from the mouth of Captain Kaboom, Jim Harbaugh, who will bow to no man as head coach of Stanford. After stating that this year's USC squad "may be the greatest football coach of all time," causing John Skipper of ESPN to rush to the bathroom to take care of the raging hardon he got on hearing this... 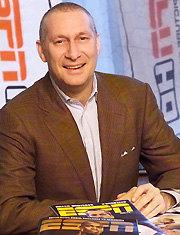 ...Harbaugh then fessed up to having some old jock flashbacks that went too far on the practice field:

One day last spring, on what's supposed to be a cerebral, measured campus

in Palo Alto, Harbaugh found himself so immersed in a drill called "Oklahoma" that he took it a step too far.

An offensive tackle blocks a defensive end, and a running back reads the collision and adjusts his path accordingly.

"I got all excited and emotional," Harbaugh confessed Thursday at Pac-10 media day.

In fact, he clapped Udofia on the shoulder pads and asked him with a straight face, "You all right?" Look into my eyes and feel my instensity: Harbaugh-tulism at its most contagious.

Captain Kaboom bows to no man--even one of his own men. Though he bends slightly to the real estate market of Palo Alto, a grossly overinflated market that has forced Stanford to consider coaches' housing subsidized by the university. It's power even defeats the rolling, fearsome thunder of Harbaugh-tulism.

*Brought to you by the Committee of SEC Teams Who Would NOT Like To Get 70 Hung On Them By An Extremely Pissed-Off USC Trojans Team In an 07-08 Bowl Game. This ad is not associated with Les Miles in any way you can possibly imagine.