Share All sharing options for: THE EDSBS TOP 25, CONT'D: KELLS HELPS OUT WITH 4-6

The task of putting together a top 25 of any sort is stressful: frayed nerves, excessive caffeine and Ritalin consumption, the ever-present explosive gas...it's like working in a cubicle with Katy Couric, actually, though without the constant reminders to get our colon checked yearly. (We do! By a guy named Stan in an alley in Macon! What?)

We therefore recruited help for 1-10 in the form of R. Kelly, who in addition to fucking the same girl happen to be huge college football fans with plenty of angles to cover on the upcoming season. The end product is so hot, it reminds us of our Jeep, because it makes us wanna ride.

See provisional 1-3 here, including our standard overreach for Michigan.

4. Texas. Is this a blind reach for a blue-chip program, or an actual stab at coherent forecasting? Considering that we're reading Nassim Nicholas Taleb's book Black Swan right now, we've been disabused of the notion of accurate forecasting and can happily toss this out there as a rank and giddy guess--since they're all guesses that will inevitably be up to 180 degrees from what we thought would happen. 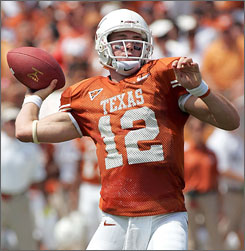 Colt McCoy: will be merely excellent this year, a letdown from 2006.

Nevertheless, Texas makes for solid guessing for good reason. The linebacking corps returns intact; the defensive line will feature defensive tackle Frank "The Subpoena" Okam, who along with his fellow d-lineman Derek Lokey is taking the LSAT in preparation to become a lawyer (and therefore a future reader of EDSBS.) Colt McCoy and his fake-ass assumed name (born Edwin Schlobodowitz, Poughkeepsie, NY) had the best freshman season in recent memory, insuring that whatever he does this season will be a letdown of some sort. We'd say he can't be as good, but the Greg Davis offensive system remains a run first game, and Jamaal Charles et al constitute the usual nightmarishly talented Longhorn backfield to keep the pressure off McCoy. Limas Sweed, Quan Cosby, and Billy Pittman are already getting open as we speak, and there's nothing you can do about it.

That means I think they'll win,
like 14 years old and slim,
I'll want to meet her twin,
double up and ride on in.

Kells needs to mention a brand name,
some vehicle or champagne,
I think they'll win okay, drink Perrier Jouet,
Now I mentioned my brand name,
and it was a type of champagne.

Kells on Texas: Straight up, dog.

5. LSU. Everyone else's automatic number two winds up at six five here, mostly because we think this team just has two losses written all over it this year. Placing them at two requires taking certain factors as givens we're not willing to grant, namely:

1. New offense, no problem=untrue. Jimbo Fisher can't help but be overrated after the bidding war that ensued this offseason between FSU and Alabama, yet the dropoff between him and Gary Crowton must be noted. Crowton's offenses at Oregon rang up huge numbers against the gnomes of the conference and sank when confronted with actual defenses.

The totals against uSC, Arizona, and BYU: 10, 10, and 8. They also badly mismanaged a quarterback rotation, something that still has a gambler's chance of happening between Matt Flynn and Ryan Perriloux, who'll happily give you odds on just that scenario at your local Harrah's Casino.

2. Lester the Unready. Les Miles' teams, fiery as they are, just have a tendency to commit crippling mistakes at crippling junctures in games. Last year LSU pulled off some dramatic wins fueled by the Dancing Ent, Jamarcus Russell, who often committed the turnovers to put the Tigers there in the first place. He wasn't alone, however--the precision of, hmm, say, an Urban Meyer or Frank Beamer team in execution and preparation simply isn't as obvious from the performance on the field. He's a player's coach, and like many player's coaches, he relies on players to occasionally pull victories directly from their very talented asses rather than game planning the bejeezus out of the opponent. On this spectrum, Les is obviously over on the emotional, loosey-goosey side, a side with a loss margin of around two a year in our estimation.

Do you trust this man? Hayley Lafontaine doesn't.

3. The talent differential cometh. The depth chart stocked so obsessively by Saban can't last forever, and we're happy to wager that Miles isn't recruiting the same grade or ferocity of beast Saban did. Miles may actually be a better motivator and people skills type--then again, so is the dead carcass of a Komodo Dragon--but now the roster's looking more and more Les Miles-ish, an unknown unknown at this point in terms of quality.

They're still good, but they just feel like a ten game season from the gut. And our gut's known for making great decisions like not buying Amazon stock, ordering the Baconnator at Wendy's before a strenuous workout, and thinking that seeing the ATHF movie without getting baked beforehand was a good idea.

'Cause that's a whole line in a Kells song, ya know, just a profanity like...

Kells is: Wearing purple and peeing on a picture of Matt Flynn to show his support for LSU. Kells likes LSU so much he'd pee on them and still film that shit.

6. South Carolina. Now we're just being provocative, sure, but we'd rather attempt to actually trend-spot and fall flat rather than simply rejigger the 2006 finishes of teams and call it a thought process. Steve Spurrier, openly and unashamedly beloved by this website, got the SC offense with dancin' Blake Mitchell up to #20 in total offense last year, a stat which should improve this year as Mitchell has a final year in the Cock 'n Fire. The tailbacks give hope for improved production, too, as Mike Davis and Cory Boyd man a veteran--nay, positively grizzled backfield.

Oh, it's a stretch. But we trust the chef.

A leap of faith must be performed for the defense, but there's evidence a-plenty for the jump: the amazing Brinkley brothers, the meanest Ladi you'll ever meet, Ladi Ajiboye, and defensive coordinator Tyrone Nix, a young defensive coordinator who constructed small miracles with a defense that took the field last year with one--one--returning starter.

You must be straight trippin'
From the purple drank you sippin'
Got your brain straight fried
Like some tasty-ass chicken.

I haven't mentioned a sponsor
This verse done need a sponsor
Navigator Cris' and Escalade
Cocks good but they ain't got it made...

...deeply suspicious of your pick.