You take that 31-15 defeat back, Tulsa: it never happened. The initial scanty report from the AP is that Oklahoma must forfeit all of their victories from 2005 and will lose additional scholarships per the NCAA's sanctions in the Rhett Bomar improper benefits case.

Forfeiting games sounds drastic, but it's more of a symbolic gesture than a punishment. Scholarship losses could be real bloodletting, depending on the number of schollies taken and the duration of the penalty. 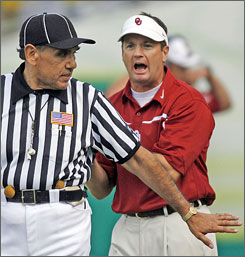 More pending as we actually figure out what's going on...

More: Two scholarships gone each year for the 08-09 seasons and continuation of an earlier probation, per the AP. Also restrictions on coaches recruiting off-campus, meaning Oklahoma's going to be investing in some turbopowered text messaging devices.

...and still more! Here's the NCAA's brief on the ruling. Nowhere will you see the dreaded phrase "lack of institutional control," but there is this comment on what affected the severity of the ruling:

the fact that the violations continued over several months, which led to two of the student-athletes competing while ineligible; and the university had appeared before the committee only one year earlier for a case in which the committee found that the institution failed to monitor the men’s basketball staff’s telephone contacts with prospective student-athletes.

Oklahoma might want to lay off appearing in front of the rules committee for a year or so, as they seem to be developing a memory.