With us today is special guest columnist Bernard-Henri Lévy. He is author of La barbarie à visage humain, L'ideologie Francaise, and Spanker, Spankee: the Time I Disciplined Audrey Tautou with a Canoe Oar. He covers media issues for EDSBS. 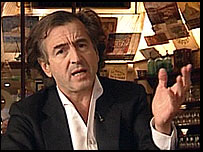 Welcome, reader. Let us amble in the sunshine of football together.

Like the rays of a dying sun that has not yet imploded and evaporated our mortal hides with its final supernova wrath, the offseason continues to plague us. And from our totalitarian masters at ESPN, we have the shuffling of the order for the announcers that comes as an equal plague to us every offseason, too, a reordering of unchanging media ingredients similar to the disingenuous rearrangement of potatoes, nachos, cheese, these "buffalo" style meats, and the batter-fried chicken tenders constituting the appetizer menu at your ingenious Bennigan's and Chilis.

(On my tour of your country, I sampled all of these variations at a quaint Bennigan's in St. Petersburg Florida. Such an array of frauds! The Chicken O' Tender Nachos, the Nacho O'Tater Skin Buffalo Fingers, the County Cork Buffalo Nacho Egg Rolls. To get in the spirit, I also drank eight, ruby red "two-for-one" daquiris, and truly felt as bloated and evil afterwards as the now thankfully dead Slobodan Milosevic, something only remedied through colorful, difficult, and passionate vomiting behind my rental car. What a lust for life sits in the corner of your average American strip mall! But I, ever the Frenchman, digress!)

Deep-fried passion, and an antidote for socialism's ascetic hatred of human need!

ESPN, your three headed chimera of ABC/Disney/ESPN, gives you the following announcing teams, most curiously rearranged for no particular reason this season:

--The Apollonian Kirk Herbstreit, ideal of ideals of Americanicité (his shiny teeth! his highlighted, but unreceding hair!), will join your boorish ghoul of a man Brent Musburger in the booth for every game this season. No mention is made of Bob Davie, indicating that he has died the death inflicted on all servants of tyrants: transfer to a more boring, less prestigious spot on ESPN2 with the Mark Jones.

--Chris Fowler now adopts the spot of the jilted lover for Herbstreit as he remains on Thursday nights, this time with two men to fill the aching emptiness in his fatty, cheeseburger-clogged American heart: Doug Flutie and the odious Craig James, a man deeply corrupt in the manner of a petty tyrant like Equatorial Guinea's Teodoro Obiang Nguema Mbasogo.

--The commisariat of the Mouse, however, seems to be rehabilitating oncle Ron Franklin, long considered to be the quintessential voice of the gloriously savage sport of college football, will broadcast ABC games (most likely from the dusty, poetic midlands of the Big 12 and Big 10,) with Ed Cunningham and Jack Arute, who may send sympathetic emails to Fowler, his fellow jilteé after his breakup with your odious Musburger.

Ron Franklin: back from the gulag of night games on ESPN2.

--Sean McDonough, Chris Spielman and Rob Stone move to Friday's special programming. The continued isolation of the mad, Teutonic Spielman proves that the Democratic People's Republic of ESPN has little respect for the daquiri-vomiting passion that surrounds it in its home country.

Much else remains the same, though one disappearance spoils the day: Gary Thorne, arguably the greatest blend of elan and savoir-dire across a number of disciplines, simply disembodies from the map, erased like a lonely Russian commissar from the official photograph. I would posit here that intervention is required! Gary Thorne cannot become the Juba Mountain region of college football, erased by a cruel and monolithic overlord wearing the veil of legitimate governance.

Let us remain thankful that Lincoln Financial continues its quirky practice of only hiring the announcers named "Dave," that most jocular of American monikers.

Bernard Henri-Levy is so fucking rich he can afford French taxes. He has a difficult and often compromising weakness for Chili's waitresses, and covers media issues for EDSBS.com.