FULMER, THE CUDDLY SIDE.

Share All sharing options for: FULMER, THE CUDDLY SIDE.

We usually get out the harpoons when the words "Phil Fulmer" appear on our radar--both because we dislike him, and bringing down something that big requires the use of serious tools. But Gene Wojeickdasdfhosqwkui of ESPN.com has to go ahead and highlight the positive side of Solomon Grundy's soul we didn't want to believe existed.

Fulmer did the dinners, the public-service announcements, the speeches and appearances. And if funds were still short, he reached into his own pocket.

If Flatt asked Fulmer to call a kid who was struggling with depression, the only question was, "What's the phone number?" And he didn't hesitate when Flatt asked him to talk with parents who had lost a son or daughter to teenage suicide.

DAMN YOU GENE WOKEJFKDSCWHATTHEFUCKEVER! We don't want to mention that Fulmer not only has a soul, but works with a foundation that works with teen suicide prevention, and calls them personally, and gives them money. He is pure, dumb evil, Gene Unspellable! How much did it cost you to write that article, huh? Two grand with expenses?

Well now, think of the cost to our veil of willful ignorance, Gene. That was priceless. PRICELESS, DAMN YOU! Now we'll have to think of some other way to type "Phil Fulmer is very, very fat" every time we mention his name, like "Phil Fulmer is calorically imbalanced, or worse yet, "...is very jolly." You have raped us with your tale of Fulmer's generosity and kindness--and not even in that funny "clown being raped" funny way, either. 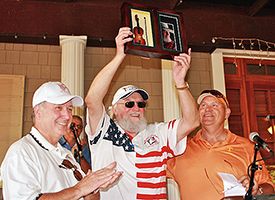