FOLEY TO GET CONTRACT EXTENSION

Share All sharing options for: FOLEY TO GET CONTRACT EXTENSION

According to our rubber-chicken eating, Gator Club-due-payin' sources, Florida president Bernie Machen dropped the unsurprising word that Florida AD Jeremy Foley would receive a new contract from the university. This may be less a compliment to Foley than an act of constitutional law, since we're pretty sure that "extending a bountiful contracte in lighte of fucceff unforefeen in thee form of fucceffive titlef of the nation" is taken directly from the Articles section of our national charter.

Foley has overseen l'age d'or of Florida Athletics: two football title, two basketball titles, ran the Boston Marathon in 3:28:10, hired Urban Meyer, ten national titles in all, and once actually answered a personal email from us re: [NAME REDACTED]. (All that and time to appear in Dante's Peak, the second-best volcano movie of the '90s.) Give him screaming live babies to be turned into sausage if he likes.

He deserves every last tasty link of Meef he requests. Bow before his mighty incisors. 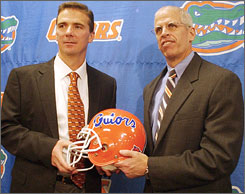 Well, there's a reason right there: Jeremy Foley, with his accomplice in the art of gettin' mad payeeeed.