Share All sharing options for: FATHER'S DAY GIFTS FOR THE COLLEGE FOOTBALL MAN

Dear old Dads--they come in all varieties ranging from the heroic, asteroid-destroying Bruce Willis-type to the Kevin Spacey, weenie-waiting-to-flip-out-and-midlife-crisisize the whole family type. (He's our fave, since he'll share the weed, hang out, and lift weights with you. Skip the bit where he's shot by the closeted gay neighbor and you'll love him like a brother.)

And if you're reading this blog, chances are your father likes or really, really likes college football. Why not give him an appropriate gift combining your mutual appreciation of sport and your varying levels of affection for him?

Our handy guide follows, custom fit for the kind of dad you may happen to have.

The man: Glib without being snide, an early riser, still reasonably fit and in possession of a deed to a house worth over five hundred thousand dollars in value, wise, compassionate, successful without being a total asshole, faithful to dear old mum and still prompt with the anniversary flowers, a patient and indulgent grandfather...chances are, you don't have this dad, but if he did exist you'd hate him for being damn perfect if he weren't Dad.

As it stands, you're likely wrenched with guilt at being less than perfect in his shadow and compensate for it with blasts of hedonism mixed in with spurts of overachieving and frantic career switches. (Hey, guys! I'm taking the LSAT!)

The gift: In return, take revenge by giving him the tickets to any of the following games: Texas/OU in the Red River Rivalry (10/06), USC/Notre Dame (10/20), or any this year's grand cru Iron Bowl (11/24), featuring new, industrial grade bitter with Saban v. Tuberville returning to the SEC West.

The Man: Mr. Harmless. Perhaps you remember Dad as less of a factor in your upbringing, and more of a quantum randomness that spend most of the time attempting to program the VCR correctly, setting different parts of the house on fire, and stocking every nook and cranny of the domicile with stuff he bought off Skymall and Hammaker-Schlemmer.

(This sucked organizationally, but it did instill you with a Germanic discipline for organizing and also gave you that awesome electric fly swatter you zapped your friends with in middle school. That thing could straight hurt you if you hit it just right.)

Mr. Bennet from Pride and Prejudice: a classic Mr. Harmless.

When he did speak, it was a mumble, and usually covering a deep desire to just tinker with the gadgets his salary afforded him in between listless stints at a job, watch the occasional History Channel documentary, and spend time with his real favorite member of the family: the dog. If his emotional availability was in question, you never really begrudged him that because either you a.) really just wanted to play with the Marble Maze game all day long, too, or b.) you considered yourself lucky that you escaped the clutches of your friend's dad, Mr. Extremely Emotionally Invested. (Goddammit, Timmy, you're KILLING THIS FUCKING TEE BALL TEAM!!!)

Ideal gift: The Cruzin' Cooler, of course. Look! You can even take Mr. Real Child, the dog. Has a range of up to ten miles, which is just far enough to not hear a spouse or child asking you for some shit they don't really need.

The man: Mr. Emotionally Invested. Really, really cared a lot, and all for the wrong reasons. Like a United Nations Mission wandering clumsily into the developing country of your soul, it came with all the best intentions and left the place a swarming, corrupt mess of a state, reflecting each member nation's own failings in one quarter or another. Mr. Emotionally Invested's archetype is the Papa Marinovich/Earl Woods type: coaching every sport, worrying constantly about the child's height/lack of, weight/lack of, or speed/lack of.

The Great Santini is disappointed in you no matter what you do, son.

If you see a guy sitting on the bench at baby swim lessons with a copy of Mark Spitz's biography in hand...that's him, already busy funneling his own failed ambitions into the little automaton of a child he desperately wants to create. Oh, Jesus you're a fucked-up puppy if you landed Mr. Emotionally Invested. Like, Mike Vick's losing pit bull-fucked-uppedness. You either broke your chain young by becoming gay on purpose, taking up tap, pretending to be retarded for the first eight years of your life dodging any and all emotional commitment for your entire life, and wandering the streets as a soulless, half-alive shell of a person mumming along with other "HUUUU-manns." (Either that, or you worship him and are just waiting to inflict the same concentration camp of love on your child. Don't worry about not doing this--it's out of your control from the start. )

The gift: Since you'll disappoint him no matter what you do, nothing.

The man: Blackjack Bob. Did you get your intermittent Christmas gifts in the form of casino chips? Have you ever uttered the phrase "my bastard daddy" with sincerity?" Do you remember Mom crying alone a lot when you were a kid? A lot a lot? Did your father hang out with guys named Red and Shorty who were missing fingers and smelled like bad air filters? Did you nod with recognition as Reese Bobby strutted into Ricky Bobby's classroom in Talladega Nights? 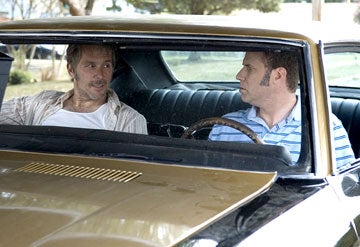 It's okay...I'm a volunteer fireman.

Do you have happy memories of winning penny bets on the first raindrop down the windowpane? If so, you were saddled with Blackjack Bob, a man who not only infected your mother with the virus of pregnancy carelessly, but did pretty much everything else carelessly, as well, consuming the rent money, insurance money, pretty much any money he could grab on games of chance, women not named your mom, and booze.

Chances are (and with Bob, it's all about chance) that you are in response very disciplined, successful, and yet still prone on making wild bets on the spur of the moment. You may, in fact, be named Nick Leeson, or work in the financial industry.

The gift: All that said, Blackjack Bob is still pretty likeable, so meet him at the SportsBook at Caesar's for a long weekend of satisfying but controlled wagering on a fall Saturday. But be sure hand your ATM/Credit card to your spouse, tape an emergency stash of cash to your leg, and take only cash. Refusing to comply with these instructions could have you riding back into the United States in the floorboards of a smuggler's bus back into the U.S. just 48 hours, waking up to the smell of exhaust and your new best friend and neighbor, Salvador Perez of el Distrito Federal. No, will not have a passport.