BANDWAGON FAN CAN'T WAIT TO ROOT FOR YOUR TEAM

Share All sharing options for: BANDWAGON FAN CAN'T WAIT TO ROOT FOR YOUR TEAM

Our guest columnist is Bandwagon Fan.

I am writing you today to express my interest in the position of being your bandwagon fan this season for your team. I am a charismatic, dynamic individual capable being a real asset to your organization, a change agent with people skills and a feel for sealing the deal.

I am also in possession of a neutral color foam finger, four burner gas grill, and a tailgating budget of several thousand dollars. 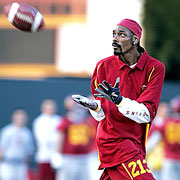 I am an exceptional bandwagon fan with a long and storied history of backing only the finest teams as dictated by preseason magazines. This year I am, as always, leaving my options open, but am leaning strong toward USC and LSU, both large programs with multiple television appearances this year. I plan to choose my team around week five, hedge until week nine, and then hit top form somewhere around week eleven when my team's appearance in a BCS bowl is all but assured.

--In the BCS title game, I executed a flawless Podenski Float maneuver across my local sports bar following Florida's first quarter against Ohio State, crossing over from the Ohio State section to the Florida without detection.

I even ditched the Troy Smith jersey that I had purchased for eighty dollars and assumed a subtle Florida support role at the bar, cheering loudly but not too conspicuously for the remainder of the game.

--Nodding approvingly when an older Texas fan was getting misty over Darrell Royal and the glorious tradition of Texas football following the 2006 Rose Bowl. You thought I was nodding in appreciation and empathy; in fact, I was thinking about cheese wheels, or ferrets, or something other than what you were talking about, since I have no idea who Darrell Royal is.

But we had a moment, didn't we? Or at least, you thought you did. And isn't that enough?

This is my picture with...blanking on the name right now.

I do, however, know that getting across to the Texas side of the Rose Bowl was a bitch, as was acquiring a Texas jersey in exchange for thirty five dollars and the remainder of my hip flask given to an undoubtedly underage Texas fan. Again, executing the flawless Podenski float--the undetected crossover to the victors' side of an upset from the losers' side--is a specialty of mine.

--Learning precisely three things about your team before hopping on, and pawning those off as real knowledge. ESPN's a godsend here, since they don't say more than three interesting things about any team before moving to the next topic. Take LSU, for example. I had this conversation with a total stranger, and they came away from the conversation thinking I was a lifelong fan.

Fan: Hey, who do you root for.
Me: LSU.
Fan: Hey, I went there. I can't wait for that Auburn game.
Me: Yeah, Flynn's gonna be a better game manager than Russell.
Fan: You know, I think that's true, too!
Me: And Dorsey's just unstoppable at tackle.
Fan: Oh, he's a beast. Just a freak.
Me: We've got a few, though. Trindon Holliday can run a 4.27 flat. That's just freaky!
Fan: No kidding!
Me: Hey, gotta run. Gotta go!
Fan: Hey, buddy--see you later, and geaux Tigers!
Me: Go Tigers!

Now, I almost revealed myself there my misspelling "geaux," which fortunately no one can spot when you're saying it. But that's part of the game. Even when a professional makes mistakes, never, ever blow cover. Otherwise, he thinks I'm practically a degree holder. Remember: know three things. This works for being a sports columnist, management consultant, or bandwagon fan, and will save your life on numerous occasions.

--I never, ever kiss. It's a whore's rule, and it's mine, too. Don't fall in love with a team--any team. Stayin' frosty is the rule, no matter how likeable the team may be, no matter how much you may want to get attached. I'm a winner, and I've been a winner for every second of my fan's life. Oh, you thought I loved gimpy Jason White and his brave half of a knee? Don't hate the player, hate the game, son. After his first pick he turned into a falling knife, and that's rule number two: don't try to catch a falling knife.

In summary: The same Oklahoma kid I high-fived in the first quarter of the 2005 Orange Bowl was the same tear-stained bratling I'm giving the finger to in the fourth. Check the digit, Pip--it's the world telling you I'm number one with a fucking bullet, and you're not, loser.

I'm number one, kid. Get a fucking helmet.

To conclude: I'm undefeated, and if you take me on as your bandwagon fan, you can be sure that if I'm around at the end of the season with you, you'll be undefeated, too. Unless you lose, in which case I'm running like Justin Gatlin on meth from your disgraced collection of schleps you call a football team, you sad, sad person, you. But I'm a winner, and if you're team's a winner, I'm coming whether you like it or not.