Share All sharing options for: PREVENT A PLAYOFF: STOP WATCHING

Give points to the "boycott the Rose Bowl" people for audacity: the notion of voluntarily killing Keith Jackson with an act of consumer disobedience is both cruel and bold. Jackson can breathe easy, however, since no one in their right mind will boycott a game to force a playoff. All they need is time, patience, and a deep well of forgiveness for the suited monkeys who, in setting the whole system up, will undoubtedly botch the whole process, leaving a pile of banana peels, cash, and smoldering wreckage.

Think less "stately formation of the United Nations," and more of a "Pizarro kidnaps Atahualpa" scenario, and you've got the right image. Because that you can count on: incompetence, greed, and a complete lack of order to the process of setting up college football's inevitable playoff. (That's a given here. If you can't accept that as a premise, we label you a football creationist. There's a pile of dinosaur bones over there that the Devil left in the ground to confuse you.)

How do we know this will be the case, aside from the entire stumbling, blood-streaked forward and backward cha-cha of human history? Because another diffuse, regionally anchored sport's already gone through it: the UEFA Champions League in Europe.

Without getting too far into the...um, "artful" history behind the formation of the UEFA Champions League, let's blow a few sentences here explaining it. European teams had, since 1955, been playing an all-Euro tournament to determine the best team in the Europe and along the way fill their coffers with ticket money and local jails with hooligans. The participants in the tourney were determined by national league championships, much as a conference champions' system in college football would work now with the ACC, Pac10, etc sending their conference champion to a hypothetical playoff.

This system worked well enough with one very, very significant kink: the monied behemoths of the Euro soccer world--Man U, Arsenal, Bayern Munich, Inter Milan, et. al--often found themselves twiddling their thumbs while rogue underlings able to rip off a few key wins in a row blazed into the national title and sped through to the Euro championship.

Therefore, in 1992 what can only be labeled as a feverish cash grab occurred, aided by a sports business-type's most trustworthy ally: elaborate math. Rather than simply taking the national league champs, UEFA adopted a complex series of league rankings and points systems that allowed for "the top performing domestic teams" to participate whether they had won their conference or not. We're not fucking around when we refer to scary math: they actually have "UEFA coefficients," which along with white guys playing skill/speed positions lets you know you have officially entered a foreign country. 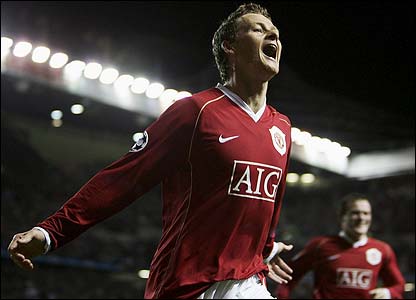 This meant getting the apex predators of the soccer veldt in the door year after year so long as they played good soccer, scored enough points, and kept purchasing better and better players to augment their already impressive rosters.

Where does college football parallel this? The prospect of a plus one playoff sounds nice because of its simplicity: fewer teams, fewer games to play, and less actual booty to divvy up between the conferences, bowls, and whatever other jackals care to descend on the pile--the NCAA, Oprah, the IMF, Larry Steadman, your sketchy uncle Robby. It's tidy.

However, given time it will exclude teams of power and prestige, teams with large television contracts and national presence. (No, we're not just talking about Notre Dame.) And in time, they'll do precisely what happened with the UEFA tournament. They will buck for a wider berth at the trough, and make sure the money trickles inequally downward to them whether they win conference championships or not.

This means an expansion of the playoff is also likely an inevitability, and not in the egalitarian, "Let the Boise States of the world rule!" manner, either. The effect in the Champions League has been to create a super elite across national leagues (conferences) that use their League money to buy bigger and better players, spruce up marketing, and generally apply a healthy dose of financial nandralone to their already swollen institutions.
Competition in conference, especially moving a team from the gutter up to the penthouse, has become more and more deterministic. Goliath always wins.

This already describes the competitive ecosystem of many big conferences in college football. A plus one, and the financial spoils associated with it, would only exacerbate this; an expanded playoff, one with sixteen teams, say, would distort this to cartoonish levels. Every conference could end up looking like the Big East in Miami's heyday, a string of palookas raised to get beaten stupid by one behemoth contender.

The solution? Precisely what the NFL has done: dose their unbridled capitalism with some pinko antibiotics, namely what they would term "profit-sharing." This could go in the form of a conference award distributed to the winning division, or via an outright pipeline to all schools flowing directly from the tv deal, coordinated after endless lawyerly brawling by the university presidents.

To keep at least a pretense of open competition, the bloated plutocratic instincts that create the system will have to don their best Che Guevara shirts or face the nightmare scenario many playoff foes tout: a system dominated by four or five schools year in and year out.

The inevitable downside would not be a dimunition of local rivalries. These still matter to the point of irrational bloodshed in soccer. To imagine that Auburn and Alabama would in the age of a playoff not still want to skin each other alive is misunderstanding the nature of the rivalry: competition, breeding hate, breeding spectacle, all in turn fed cyclically by the competition. The scores will still matter.

Without careful allocation of the booty, however, college football may end up with the equivalent of the Champions' League, one long Voltron episode where the robeast always loses and the same, five-part hero always slices the villain in half--a predictability which combined with a sudden interest in vaginas, drinking, and combinations thereof caused us to tune out completely.

Even with that valediction, though...there's still a place for the Liverpool 2005s of the world in a system as allegedly imbalanced as the UEFA system. And the college football equivalent of that is, to us, well worth the risks. Good thing we're so future-forward--it helps to be that way about things that will happen whether you like them or not.