SEEING OTHER PEOPLE: 10 REASONS YOU SHOULD ROOT FOR FLORIDA TONIGHT

Share All sharing options for: SEEING OTHER PEOPLE: 10 REASONS YOU SHOULD ROOT FOR FLORIDA TONIGHT

One you get over the incessant squeaking of the shoes and the Japanese saga-sized memory you need to remember all of the teams and their rosters, basketball is still grossly inferior to football in every conceivable way. Every college with over 500 students has a team, the players breeze through in one year on their way to a low bid in the NBA draft and eventual career riding the bench for a Greek semi-pro team, and it's played indoors. Even as a placebo for lack of proper sporting content, it's still a bitter pill to swallow.

It's what we've got, however, and if we were ever going to write about it as someone with what could lightly be called a rabid Florida bias, that time would be now. After alpha-dogging Ohio State in the national title game, Florida's charismatic defending national title squad faces off against the very same Buckeyes tonight for the national men's basketball title.

A moment of memory for those who don't recall what happened in football.

Ah, who can't get enough of that? Moving on: we now attempt to convince you to root for Florida's basketball team tonight, since now that we've won one national title already, roared through the regular season, SEC tournament, and now the Big Dance, we're paying attention. (No one said we were trendsetters.)

10. Taurean Green, random basketball event generator. Press the button: you may get a turnover, or a halfcourt three, or brilliant bounce pass inside to a waiting big man. If you're crazy about Russian Roulette or the entire country of India, you'll love the random mayhem that can be a frustrated Green at the point.

9. Our mascot. Again, in the era of roided-out anabolic wonders who got mid-90s redos by the design department, Albert still plods around like a middle-aged dad looking for the family-sized bag of baked Doritos.

(You can hear him, can't you? Hey, if I eat half the bag, it's still only sixty percent of my calories for the day!) Still evidently the carb-lovingest mascot in the known universe.

8. Tito Horford. Al Horford's huge-ass Dominican dad who'll sit down and stop blocking your view whenever he damn well wants to, shorty. Tito's got a pair of pythons so big they wobble like turkeys on a tightrope when he claps, and shows them off by wearing a sleeveless Al Horford jersey to all the games. Better still: he wears jean shorts in the stands. Just try to mock him for it.

We're not saying he's especially worthy of your rooting--his son is. We're simply suggesting that if Tito Horford is anywhere near you, or even looking directly at the camera while you're watching on the couch, you should cheer for Florida. Even if you don't mean it.

7. Get in on the ground floor of a great conspiracy theory. Basketball fans are the Christiano Ronaldos of the sporting world, forever gripping their leg when a strong gust of wind and calling foul. By forcing the issue with the big men in the middle, Florida's been getting people in foul trouble all tournament long--a boom-armed Ent like Oden will be easy picking for the foul-magnetic Gators. Subsequently, every basketball hater saddened by the early exit of Duke earns a new target: Florida, and how "the refs gave them every call." Glad we could help you out, Buck Nasties of the hardwood.

6. Joakim Noah's mom. Miss Sweden 1978. Sister Yelena's fine, too, but we have no idea how old she is, and will hence declare her off limits. But Miss Sweden 1978, y'all. Skal! She could smell like lutefisk and half of you would still hit it.

5. Corey Brewer. Having Nantz and Packer repeat how poor your family is over and over again must suck for him, but there's a skein of truth to the story: where most of the Gator starting five have NBA pensions, steady family income, or a wacky French tennis star/reggae singer's fortune to lean on (Horford, Green,) Brewer's family's only connection to David Stern's Pensioneers is Brewer himself, who could have bolted for the NBA last year but came back for history and sentiment's sake.

Another year won't hurt his status, of course, especially after the stellar performance he gave against UCLA. And who doesn't like being called "long" on national television? But Brewer didn't have to come back, a testament to someone motivated by something more than loot.

4. Lee Humphrey. He's from Tennessee, and chose Florida. Like Steve Spurrier. Like ourselves. This obviously means he's a freakin' genius bastard, and deserves all of the confetti and ladies' undies you care to throw at him. 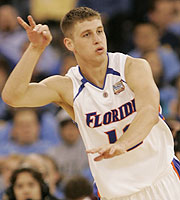 3. Billy Donovan's last day as a great coach/first day as a legend. Donovan could ascend to Valhalla with a win tonight and still come out turdeating bastard-dog if he leaves the Florida job for Kentucky thereafter. There's some NBA rumors, too, which would be a lesser crime but possibly dumber after he considers what happens to most college coaches in the NBA--as in Pitino, one of his mentors and perhaps the legendary college/pro coaching conversion. Tonight, you may enjoy what will either be his last night as a Florida saint, or his first night as a walking, well-salaried legend who stayed home. Could go either way.

2. Watching a forty-eight year old man lose a game of basketball. Greg Oden is 48. No birth certificate convinces us otherwise. He may sit on the bench afterwards and cry into Danny Almonte's shoulder while taking Kleenexes from the hand of a consoling Dikembe Mutombo. They're all a combined forty years over their actual estimated birthdays.

1. Joakim Noah. A 6' 11" half French, half Swedish extrovert with an unabiding passion for the game and a freak-boy edge to his aura comes along to liven up college basketball, and all you can do is rag on his au naturel dentition and less-than-attractive face?

Shame on all of you. First, Noah plays hard--damn hard, probably above his natural talent level, and by the numbers above most of those who've faced him. Second, he's not the best looking guy and owns it for a number of reasons: he was born rich, is 6' 11" and probably puts more mileage on the first six inches of his penis than you'll see on your whole johnson. Third, he'll be drafted in the NBA, diddle around for a few years, and live the life of someone who can fly to Nepal, Sydney, Rio, LA, Paris, or Antarctica if he feels like it...all on a whim he got while you were trapped at your cubicle wondering if that last latte put you into overdraft, you stupid, sloppy bastard.

It's obvious why people hate him: he's passionate, odd, and a child of privilege. We'd hate him if he didn't wear a Florida jersey, since he's got all the markers of a classic asshole. This would all be true if Noah wasn't such a nice, goofy, and uniformly outsized personality off the court. He makes ugly faces in pictures with effort for fans; he shows up to Shands to sign basketballs and visit sick kids, and has done so unannounced. He shows his food to whomever wants to take a picture of it, even if he's chewing it at the time. He has to be curtailed at pep rallies from espousing his very, very liberal political views, often discussed while he's wearing a Dr. Seuss top hat or bizarre sunglasses. He's outgoing, genuine, and singular personality.

This is enough to make wallpaper mob folks dislike him on sight, the kind who find black pepper to be "too spicy" for their palate. Joakim Noah can't hide, and not just because he's a heel lift away from being seven feet tall. You can have the PR-safe version of him when he goes pro and takes the NBA's press seminars. For now, Florida fans have the strangest college hoops talent wandering the campus since Bill Walton smoked weed after UCLA games "to calm down" with John Wooden's tacit permission. Treasure the weird while it's local.

Noah: not pretty, but a remarkable beast while he have him.