NCAA president Myles Brand expressed concern Thursday about coaches' salaries, but said it was up to schools and universities to police themselves when it comes to hires.

We're mailing Brand a blue helmet as we speak, since the NCAA is rapidly entering UN peacekeeper territory here. Brand makes, with benefits, three-quarters of a million dollars a year for heading up an organization whose purpose he can't define. They've also been under investigation twice in the past year regarding their non-profit status, something they combatted by paying $160,000 to lobbyists in Washington to protect said status. 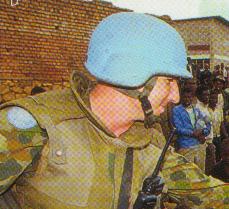 Just another vaguely defined non-profit it reminds us of...

They also make millions from the NCAA tournament, their cash cow, which in no way resembles a professional sporting event, either. We play ping-pong to ecstatic thousands at the Georgia Dome every Thursday, in case you're interested. But let Myles go on:

"I think we have to begin asking some very hard questions," Brand said.

"It raises the question of propriety for colleges and universities. Is this the appropriate thing to do within the context of college sports?"

Billy Donovan, Florida basketball coach, will enter football coach level-salary whatever happens to him post-tourney. Either Florida's paying him jillions, or Kentucky's paying him jillions. You will hear nothing about that, however, because the NCAA funds its amorphous activities via the Big Dance. The NCAA makes nothing close to this from football, who farms its postseason out to a cartel of schools without the NCAA's logo and involvement.

Greed with the NCAA logo? Integrity-laden excitement. Greed without it? An "arms race" threatening the very integrity of college academics.

No, but please...go on, Mr Annan Brand. We're about to soil ourselves with the next quote. It's like you're watching It's a Mad Mad Mad Mad Mad Mad World, and Jonathan Winters is about to demolish a gas station singlehandedly. This is the best part! Hell, watch that first, reader. You'll laugh without cynicism first, then read Brand second and trot out the bitter laugh.

But he said the NCAA has no ability to regulate salaries, and plays only a limited role in how its schools finance athletics. Still, he said, it was troubling to see some college coaches making more money than their counterparts in pro sports.

Oh, just sit back. It's like a fine Brunello, isn't it? Refined raw attitude, little wood and berry on the palate with hint of leather...exquisite, really. Brand spends nights mourning the death of collegiate athletics because some pro coaches don't make as much as college coaches. Imagine him weeping into his gold thread sheets and pining over the fate of Mike Holmgren, since Brand makes more than most normal CEOs, and more than some college coaches he's so concerned about.

For running an organization that makes arcane rules, protects its non-profit status via government lobbying (think Senators get nice seats at the Final Four? Sure they do), and hawks one massive basketball tourney as its primary source of revenue, Brand gets paid more than your run-of-the-mill neurosurgeon. And he doesn't even have a proper job description, since no one can define exactly what the NCAA does anyway.

As head of a regulator without enforcement power, a corporation with a brand that doesn't pay taxes, and CEO of a company without a mission statement, Brand's really entered rare air here. A blue helmet may be the only logical costume if and when his tenure ends at the NCAA, since the United Nations is the only organization more messily defined, heavily bankrolled, and exempt from regulation from an outside source. Brand does well enough shrugging as the money rolls around at the NCAA; he'd look just as magisterial parking his car illegally on a New York street next to some Nigerian diplomat's limo.