Michigan enters the Fulmer Cup. Better yet, they did it for no apparent reason, according to the incident report.

Two University of Michigan football players are accused of attacking a fellow student in the West Quad residence hall for no apparent reason on St. Patrick's Day.

Carson Butler, 19, and Christian Richards III, 19, were arraigned today in 15th District Court on one count of aggravated assault and one count of assault and battery each. They were released on $5,000 personal bond and have a pre-trial hearing March 27.

Both Butler and Richards 3.0 already skated on thin ice discipline-wise at Michigan; being overachieving Michigan-types, however, they obviously felt compelled to add to the resume. Lloyd Carr predictably had no comment on the case, preferring instead to grumble, wave his hand dismissively, and go inside where no one would ask him any questions and let him eat his goddamn soup in peace. Michigan authorities say they have no reason to believe alcohol was involved, aside from these factors:

4. It involved people beating other people up for no reason.

Other than that, there's no reason to believe alcohol was involved. Assault and battery, per Fulmer Cup scoring, brings with it big boy points: 3 per charge, in fact.
The misdemeanor aggravated assault charges bring two points each, putting Michigan at a formidable hypothetical score of ten Fulmer Cup points for their debut.

Now just watch someone from Ohio State drive a tank through a nunnery just to show the Wolverines. It'll happen. Just wait. 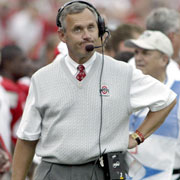 Won't lose to Michigan in the Fulmer Cup, either: Tressel plots his next move.

UPDATE!!!!: Yost and the Ann Arbor News are reporting that Eugene Germany, the third player suspended for spring, was nicked for weed-related violations. If so, then there's another two points for the Wolverines.