Ah, so many jokes here, so little attention span: the University of Florida Gators took their obligatory national championship visit to the White House yesterday, with President Bush applauding their determination and "playing together for the common good." Bush got a football, and a jersey with 43 on it, which is both his number in the presidential sequence and his approval rating if you add 13 points to it, according to the latest Newsweek polls. 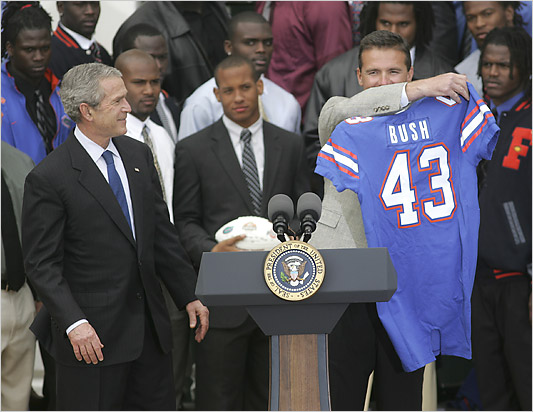 That all happened, which you may read about in this article. You can watch the video here, too, but it will not show the following behind the scenes drama:

--Chris Hetland, troubled Gator kicker, was told he was doing "a heckuva job" by Bush, who then turned to Meyer and urged his immediate dismissal.

--Percy Harvin was declared a weapon of mass destruction by the office of the Vice President. Fortunately, he was allowed to sprint comfortably to Syria before authorities caught up with him.

--Meyer's petition to have Quentin Groves declared "an enemy combatant" was declined by Bush. "Well, we thought he was terrifying enough," said Meyer afterwards to bystanders.

--Backup tight end Trent Pupello was, however, waterboarded for stepping on the White House grass and "looking suspicious." Pupello apologized, and was then given "a free vacation to Yemen" for all his courtesies. Meyer said he has not heard from him since.

--Bush also was overheard asking Chris Leak if he'd be interested in "an entry level job in our legal department, which may be open as soon as next week. Loads 'o fun."

--Finally, Cam Brewer, United States Marine and Florida walk-on wide receiver, was asked to accompany the President on his morning mountain bike ride. He was given no helmet, however, and had to fashion one from a bowl swiped from the White House cafeteria and a spare pair of shoelaces.