Share All sharing options for: SUBCOMMANDANTE WAYNE'S WEEK IN REVIEW.

The Greatest OSU fan in the world, Subcommandante Wayne, returns for his weekly commentary. Enjoy?

Greetings, bitches. Subcommandante Wayne reporting live from the 6-1-4, where the chicks are into dicks and slick tricks, y'all. The Subcommandante is sorry that it's been a long time since I checked in, but between my brutal reign over the realms of World of Warcraft and mom bitchin' at me to get a job and shit, it's been hard sledding for this tired old sled dog, man.

But a few things have come through this week. One, Michigan got sackslapped by the Trojans, which is great because FUCK MICHIGAN. Lloyd Carr was sitting on the sidelines crinkling his old colostomy bag underneath his shirt and it was sweeter than eating crab dip out of Jessica Alba's buttcrack. 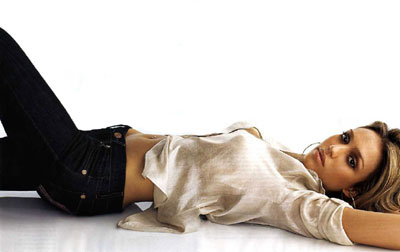 My friend Doug and I have this argument about her, by the way.

Doug: You know she'd suck in the sack, Wayne.

Wayne: No way. She'd roll like a beast, dude.

Doug: All those bones? You'd cut your ass just trying to get up next to her and shit.

Doug's actually a 15 year old Korean Warcraft player, so he's always on at these weird hours. But man has his English improved. He went from straight from "you my bitch suck ass" to "The ass you have been handed is your own." I swear, that guy must be a genius. I want to save up some dough and visit him, because if Korea's anything like it is in The Best of the Best, it's this kickass martial-arts heaven where everyone's punching trees in the snow and meditating beneath frozen waterfalls with their shirt off. Oh, and eating dog, too.

Anyway, I thought I might also bring you up to speed on another important thing: Florida suckz. That's right, the Subcommandante said it here on this gayest of Gaytor websites: they. Suckz.
Here's why:

Floridians are all gay.

This is so obvious if you watch any television show about Florida.

--I watched Nip/Tuck the other night, and those two dudes are just like this close from doing the Heimlich without using their hands with each other.

--The Golden Girls are obviously all just a bunch of freakin' dykes, except for that tall gay guy with the deep voice who keeps 'em all in line...and he's totally and openly gay, right? Still, I wouldn't fight with him.

That gay dude is tuff.

--Silk Stalkings? Just the name makes me want to suck a fat one. I mean, cause Wayne's totally not wanting to suck a fat one. Ever. But because the name is so gay, it would make me want to, if I weren't already pressing the legal limits for sexy in eight states and banned from national parks in the summer because my hottness starts forest fires. By the way, Smokey the Bear? Gay. Never wears a shirt.

--Dexter? It's the dude from Six Feet Under. Gay.

--Miami Vice? A dude in pink who hangs out with a black dude with a gheri curl and has all this disposable income? Sounds pole-smokingish to me, especially because he does that "Oh, I'm not shaving, but I'll shave just enough to make it look like I'm not shaving" thing? Totally homo.

--Even I Dream of Jeannie is totally gay, because if Wayne had Barbara Eden in a bottle at home I'd be on that like stink on a Wolverine. And have you seen how clean his house is? MANLAW: Clean housekeeping for a single guy=gay.

In comparison, there's a sandwich somewhere in this room I lost a week ago. And I don't give a shit. Mom doesn't even know. There's totally nothing straighter than that.