Attempt to sift what didn't happen in the Fiesta Bowl last night from what did in the following paragraphs, and you lose. Boise won't compete for four quarters. Boise won't be able to stop Adrian Peterson. Boise would keep pace admirably with Oklahoma in almost serene fashion, running identical gameplans to the Sooners until the mad flurry of mistakes, trick plays, and outright madness that would end the game. Paul Thompson would turn in a maddening performance, doing as much harm as good by throwing three interceptions after posting a tidy 20 tds and 8 ints on the year. A walk-on wide receiver would throw the winning touchdown for the team just over a decade into their D-1 existence. The running back for Team Underdog would propose to his girlfriend immediately after the game and on camera, thus ensuring he would miss out on the most freewheeling and satisfying years of NFL/Arena League bonus-fueled sexual conquest he would know.

Fox could have thrown in anything and we would have believed. Jared Zabransky's alcoholic father cleaning up, working as the equipment manager, and then tearfully embracing him on the sidelines. An inspiring and hopelessly retarded ballboy. A walk-on whose whole dream had been to play Boise State football who finally got the chance to throw the winning TD (scratch that--actually happened.) We half-expected Zabransky to reveal that pregame, he and his crew of motley misfits had also exploded the planet-killing asteroid menacing earth, and that you were all very welcome, though Dan Hawkins had been killed in the process, and we should really, really think about that before the guitar solo takes us to the credits.

If Radio had showed up, we wouldn't have been surprised.

The most impressive thing about the improbable script--

which would have been rejected had you written it, something you would be sad about as you waited for the next order of calimari to come in from the kitchen for table 23--is that its opening acts were so prosaic when they were supposed to be anything but. This was supposed to be cute, possibly competitive fun, with Oklahoma muscling through via superior talent and execution in the end.

We don't stand a chance.

Yet Boise did not play with the calculated desperation of an underdog. For the better part of four quarters, they ran right at Oklahoma, capitalizing on a long play-action pass and a Thompson turnover before getting a bit stodgy in the second half with run-heavy play-calling. They could do this because Boise's defense, running what appeared to be the 5-2, stacked the line against Oklahoma and allowed no long runs to any of the Sooner backs, even slamming into them in the backfield at times.

They happily punted four times with the lead before the giddy, vertigo-inducing sequence ending the game, which really defies description, though we'll try:

1. Oklahoma alpha-rolls Boise. Thompson goes through a fit of efficiency, completing passes down the field until they score to bring the game to 28-26. Oklahoma goes for two three times, short-circuiting the first two with penalties--including a bizarre illegal shift where Oklahoma forgot that two men can't be in motion--before Thompson threw in traffic it hit Jauquin Iglesias.

2. Boise gets the ball back with around two minutes on the clock. Zabransky and wideout aren't on same page; Zabransky throws pick six, and OU leads 35-28. Zabransky looks like he's upset, but more like burnt-toast upset, and not the Oh my god I ran over the baby upset he should be.

3. Boise gets ball back with something like fifty seconds on the clock. Boise then calls the hook and ladder, converting 4th and 18 and scoring the equalizing TD to take it to overtime. Bob Stoops waits for stadium roof to collapse in on him. This won't happen for a few more plays.

4. OU gets the ball first. Peterson runs roughshod through the Boise defense for a score.

5. Boise matriculates to a 4th and 2. A stacked formation to the right with Zabransky under center. Vinny Peretta, walk-on tailback, lines up under center as Zabransky sprints wildly to the sideline in motion. Peretta runs right on a run fake, pulls up in a blink and heaves what appears to be a hopeless lob to the endzone that is caught by tight end Derek Schouman.

6. Petersen then just raises a fist to the heavens and says "fuck it," but in very polite Idaho kind of way, and goes for two. Same formation, no Zabransky motion. Ian Johnson in the backfield. At this point, as a viewer, the extremities are buzzing with endorphines. Zabransky appears to throw, but has pulled the Statue of Liberty play off to a degree of perfection unseen even in legendary flag football games. Left guard crushes whomever might think of tackling Johnson (pancaking them, actually) and Johnson runs straight to the sidelines. Boise wins.

The sensation swirling through the head after watching all this happen can only be described as narcotic. We scarcely noticed jumping up and down, though we were; or the screaming, which got the wife out of bed, since the late start and marathon finish had put her on the bench long before the delirious finish. Even Thom Brennaman's screed about the playoffs, begun just before the final play, couldn't ruin the fun; in fact, both Charles Davis and Barry Alvarez, who'd been wrong all night on potential play-calling, seemed to exult in being exotically wrong this time. (We're still waiting on that run/pass option, Charles.)

It was eyeball crack from start to finish. If there's a better game on the horizon, we may not live through it. 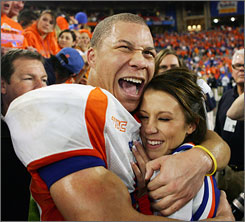 Save the cheerleader, save the world. Ian Johnson did.