Via Rob Durham in our comments section: Buckeyes in dire straits over illegal benefits?

"We still have conversations to occur, and hopefully by the end of the week we will have it resolved one way or the other," athletic director Gene Smith said.

Asked if it appears to be a serious matter, Smith said, "I can’t comment on it at this point."

NCAA regulations prohibit fundraisers to help players’ families, and NCAA spokesman Bob Williams said OSU’s investigation will determine whether there was an extra benefit to the families of running backs Antonio Pittman and Chris Wells, defensive end Lawrence Wilson and defensive back DeAngelo Haslam. If so, the players would be ineligible to compete in the national title game Jan. 8 and the school likely would apply for reinstatement.

The complete partisan would at this point be WOO-WOO!-ing all over this from a Florida perspective, but the NCAA skeptic has to ask what the hell an organization does when it's policing dinners held to raise money so families can see their children play the second biggest football game of their young lives. (Michigan's got the top spot in any Buckeye year, si? Si.) Plus:as a Florida fan, you don't want to beat Voltron when he's missing a leg, right? Of course not. You want to knock the whole thing on its ass, not a diminished version of it.

And after all...since when has anyone in Columbus, Ohio remotely associated with the football program had trouble finding transportation? We thought Escalades grew on trees up there, complete with complimentary lint rollers and Grey Goose bottles. Throw in a gas card or two and you're Glendale-bound and rollin' like an Israeli mafioso, baby. 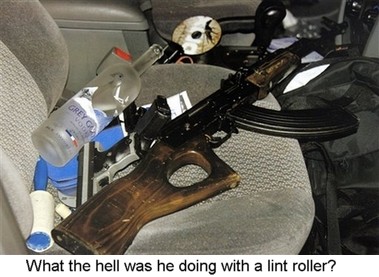 All recipients of spaghetti dinner funds will receive the 'Clarett Package.'