We update you on the ongoing oddsmaking going on in Vegas re: the Alabama Crimson Tide coaching job.

4. Coach Ace Bricka: No picture available, but we've seen the kind of results his innovative system can generate in his work in the Mutant League. 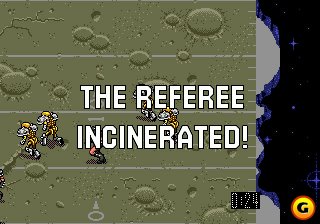 6. Paul Bryan, bassist for Aimee Mann and indie rock artist: 55-1. "All he needs is a t and he's a shoo-in for the job," says another anonymous Bama insider. Bryan, though, expresses no interest in the job: "I'm a bassist and I know nothing about football. Thank you, though."

But he sounds like the guy for the job, doesn't he?

7. Turd Sandwich: 3-1. The people's choice at this point. "We had one a these for the past few years, so at least the taste wouldn't surprise anyone," said commentator Phil from Hoover on the Paul Finebaum Show yesterday. Turd Sandwich has also been known to go by the name Mike Sherman, and has been applied to any other coach qualifying as a tired NFL retread.