SEC CHAMPIONSHIP: THE RECAP PT. 2, SPONSORED BY MY LAWYA DALLAS

Share All sharing options for: SEC CHAMPIONSHIP: THE RECAP PT. 2, SPONSORED BY MY LAWYA DALLAS

Part one is here. The recap picks up at halftime, where we've found out we're going to the national title game if we can hold on to a 17-7 lead.

--Arkansas' band--no lie--honors the game with a Zorro-themed show. The fact that Zorro is a large part of the Arkansas popular imagination makes us laugh even as we're typing this. The glittery sashes on the unis don't help the overall Branson, Missouri feel to the band show. 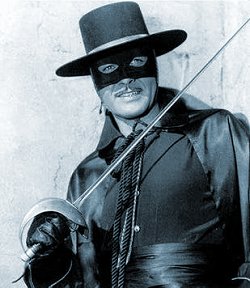 --The Dr. Pepper guy gets somewhere in here and sinks six out of ten. He's some poor guy form Lousiana whose house had a tree fall on it during Hurricane Rita. He's cruising on underdog goodwill until he foolishly announces to the crowd that he's an LSU fan, and "GEAUX TIGERS!" over the PA system. 80,000 people simultaneously turn on him, and he leaves the field to a shower of tomatoes, old boots, and seat covers.* Again, the Dr. Pepper Challenge proves to be more entertaining than it should be, especially when someone in the section muses out loud about Reggie Ball's chances in the game. We're guessing the totals would match his Arena League signing bonus.

--Third quarter begins, and with a disastrous first series: Leak lasers a pick into double coverage, completely missing both the preying eyes of the DB and the linebacker standing in the middle of the field waiting to concuss poor Harvin on the play. Is he wearing the Evil Chris goatee? That's when evil Chris usually surfaces: in the third quarter, once he's bound and gagged Good Chris and put him in an equipment locker during halftime.

--McFadden lines up at qb and throws a beautiful, clinical rope to Felix Jones for a TD off the short field. It's 17-14, and the third quarter malaise is creeping up in a nauseating replay of the Auburn game. A team that's done next to nothing against Florida is edging in via braindead mistakes and turnovers by the offense, and we're pinned in the end again.

--AggroGator goes bonkers after the Leak pick and whips his hat to the ground a la Spurrier. A loud "fffAPPP!!!" sounds to our left, and the savvy, fiftyish guy we've been trading brilliant, unscripted analysis with for the whole game is holding his right eye.

AggroGator has whipped the edge of his baseball cap into the guy's eye. After offers of getting ushers to remove AggroGator--now apologizing and sitting sheepishly in his whole row of unoccupied seats--the guy shows real tolerance by not having him kicked out of the building. "He is a Gator," the guy says, showing a class we never plan on displaying, even toward other Gator fans.

--We get the ball back, and Leak tops the previous mistake by tossing an inside option shovel pass directly into the arms of Arkansas tackle Antwain Robinson. This would normally spell doom for Florida, who now trails by a score of 21-17, but Robinson violates the laws of science and sound judgement by doing this:

It is a scientific fact that in five of six games this year where Florida has trailed, a case of premature echompulation has coincided with a furious and insurmountable Florida comeback. Houston Nutt clearly did not prepare his team adequately for this game, since we blame the entire second half collapse by Arkansas on this one instance of brainless behavior. We would be sad about this had we not seen it. Clearly, the game is over at this point for Arkansas; the rest is just math.

--That is all typed in retrospect, though. Right now the greenish air of the Georgia dome is thick with the odor of despair, all of it oozing from the pores of Gator fans watching Evil Chris give FTD gift baskets of whole touchdowns to the Razorbacks. The next series gets worse--three and nowhere, the same playcalling and stifled execution that keeps us with our backs to the goalposts and hemmed in at our own 15: two crapulent runs up the gut, one with Evil Chris, whose goatee is clearly visible from the upper deck now, and another dropped pass by Harvin.

--On our own 15, Meyer calls a fake punt. Words fail to properly measure the ballsiness/stupidity of this call, other than to say this: Houston Nutt was shocked, and he's crazier than a sack of rabid weasels. We're too stunned to say anything, actually, since like most everyone else we passed out sometime just after the pitch to Cornelius on the gunner-around, and had to brought back to consciousness by TCOAN. Thank God for Youtube:

--Meyer then nearly undoes all of the genius by blowing precious timeouts on the series. On the timeout, though, he's pointing (of course) and lecturing his coverage team like this is the punt of the apocalypse, gesturing and imploring his players like a touchback or block will cost precious innocent lives. The whole dome teeters as if balanced on a single large marble; this is the vertiginous stage in the game where the superstitious fan believes that even a single movement, a stray negative thought or utterance, even the desperate willing of something positive happening can alter the game. We swear we remember TCOAN saying something about getting this punt back; she has an uncanny ability to force blocks and fumbles with her mind. No, this is not the reason we married her, but it helps.

--The kick is off. Poor, poor, poor Reggie Fish back to the one yard line, where the flicking finger of a malevolent god knocks the ball six inches too far for him to basket catch. He twists his body, tracking the ball with his neck twisted like an outfielder. The ball bounces through his hands, and Wondy Pierre-Louis lands on the ball in a scrum. Haiti--or at least the five hundred people watching thing game in Haiti-explodes. The tipping point: arrived, and with us leaping for joy with all five inches of our vertical leap and hugging everyone in a twenty-foot radius.

--With that, Arkansas's done. They answer with a nifty high school gadget play, but then Percy Harvin warps pursuit angles and screams off for a nearly seventy yard run where the safety--we swear--weeps openly on the chase. The rest is denouement, and Florida has their first SEC championship since 2000. We say a silent thank you to Sylvester Croom for beating [NAME REDACTED] and starting this all; none of this would be possible without him.

--And then...festivity. The whistle blows, and Reggie Nelson, per habit, leaps into the stands for the biggest group hug he'll ever get. In fact, he sits in some total stranger's lap for damn near five minutes, bobbing his braids and basking in the moment. Tebow flaps his arms like a grain-fed megatoddler. Dallas Baker strips down to his UnderArmour and is chomping and dancing like a madman. Leak picks up the SEC sign and carries it over quietly to the sidelines; there is a roar, and Leak--who escaped from the lockerroom and replaced Evil Chris for the fourth quarter--is overcome with emotion. Red shirts stream up the aisles, and confetti cannons belch glitter onto the field.

Percy Harvin in announced as MVP. He quickly alarms the quick-eared by thanking...his "lawya Dallas." Except he doesn't say "lawya," but rather a word that begins with an 'n' and ends with an 'a', commonly used by black men in very casual situations to refer to other black men. (Longstanding joke that the racial slur in question may be subbed with the word "lawyers." Try it: it works much better than you might think.) Go to around the fifty second mark and listen very carefully--we thought we misheard it at the time, but nope, it's right there. We'll have to work on the media relations bit with Percy this offseason.

Caught up in the moment, sure. But we'll go ahead and second that, Percy. Urban, Dallas, Chris, Tim, Reggie, you, me, anyone bleeding Orange and Blue. For five minutes last Saturday night, we were all your lawyas. And thanks to you, we'll be your lawyas in Glendale in a month, too.

*Not true! Though it was close.