SEC CHAMPIONSHIP: THE RECAP PART ONE, THANKS TO STEVE AT HOOTERS.

Share All sharing options for: SEC CHAMPIONSHIP: THE RECAP PART ONE, THANKS TO STEVE AT HOOTERS.

The following recap of mostly true events is brought to you by Hooters on Peachtree. Hooters: the preferred hangout of all ticket agents drowning their sorrows because Arkansas and Florida don't travel to the Georgia Dome.

--First, there's pregame, where we watch Reggie Ball in the ACC Championship Game. We say Reggie Ball and not Georgia Tech because no one else really mattered in the equation. Against a Wake team who took four quarters to score nine points, Reggie channeled his inner Reggie Ball to the fullest, perhaps even eclipsing his masterwork of misplay at Georgia: 9-22, two interceptions, and patented Reggie Ball jawing after every hit defenders put on him. This would be acceptable if Reggie Ball came back and tossed darts into the heart of the Wake defense for scores, but Ball instead opted to loft up hopeless deep balls in double and triple coverage, leaving defensive players like KaMichael Hall and Joe Anouai literally crying from frustration.

--Two Tech fans sat beside the EDSBS table at the Brewhouse. When Ball tossed his second--another called pick from someone at the table--we whooped out "WOOO Reggie Ballsome!!!" The two techies turned, looked at us, and nodded in a look of gutted desperation we hadn't seen since the Quincy Carter era at Georgia. They couldn't even muster anger, so brutal and complete has the Reggie Ball Reign of Terror been at Tech.

--Jacksonville, btw, couldn't have looked worse: rainy, a plague of empty seats, and a dank, miserable feel to the whole ACC Championship that made it appear that both teams had just played in the Genghis Khan Insurance Ulaan Bataar Bowl. 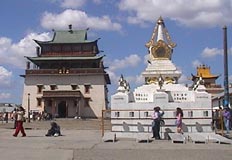 --Weo Tai, our Shaolin tax guru, and his crew of dashing and sketchy South Florida confidantes joined us for the game, along with stalwart The Conscience of a Nation and noted commenter __________.

Two blocks from the Euclid Avenue Yacht Club and a brief peek in at the USC/UCLA game ("Wow, they're up. Take a picture of that, it ain't holding!") and we're off to the Georgia Dome, where we soak in one of the wondrous sights of the SEC Championship Game: people unaccustomed to public transportation taking MARTA for one of six times in their life.

--The best sight came when an Arkansas fan got cut off from her group by a rapidly closing door at Five Points. Clad in a puffy-paint red sweatshirt clearly put together in five minutes of intense crafting, she shrieked as the door closed. "THEY HAVE MAHHH TICKETSSSS!!!" she screamed in a half-laugh, poorly disguising her terror at being left alone on a MARTA rrain for three minutes until the next one came along. Her friends eyed her through the glass like she was Michael Biehn in The Abyss, trapped in a minisub and sinking into the cold squeezing embrace of the deep. Courage, Maybelline, they said with their eyes, clearly not believing they'd ever see her again.

--Since the Miami crew lost all three of their tickets somewhere between the hotel room and the MARTA station, we were charged with finding six tickets at reasonable value twenty minutes before the game. A daunting task, but some frenetic cell phone work got us in touch with Steve, who sounded on the phone like a burly, 300 poundish guy from Mississippi who announced in a blur that yes, he had six at face, but that he was at Hooters and drowning his sorrows in what turned out to be a pig of a game for ticket brokers.

We found the not 300 pound and decidedly unwhite Steve wearing a hoodie on the corner, camped safely off the property of the Georgia World Congress Center where he could be arrested for scalping. (In Georgia, scalpers have to avoid a sanitation zone set up around the property, since Georgians don't really mind scalping, they just don't want to be sullied by the actual sight of it.) We're more than comfortable exchanging cash on street corners, but the aggressive entrepreneurship of the Georgia Dome periphery was a little intimidating.

Steve: Yes. They called me on the phone.

--Tickets in hand and gassed up after an alcohol stop at Jocks 'n Jills that would have made Jimmy Johnson's pit crew proud, we sprint toward the Georgia Dome. (We also see that UCLA is still holding on to a slim lead. "Take a picture of that, 'cause it ain't holding! Heh.") Commenter Anonymous, running alongside us and drinking a plastic cup of whiskey, obviously hits the sharp edge of a gulp and winces. "Does whiskey have any future as a sports beverage?" we ask. He nods, obviously in pain but still half-hoofing it. "That would be no," he says.

--We have, for the first time in our lives, made a positive impact on someone else's lives by securing tickets for the game, only missing a few plays along the way. We pass a scalper, who asks, "Need tickets?" We say no, and hear a dismal, dejected phrase as he recedes into the background: "Fucking disaster." We're guessing Saturday was not a good day for Team Scalper.

We meet the remainder of the crew, and leap into the maelstrom of the Georgia Dome.

--The Dome, putrid as its moldy sherbet color scheme may be, rocks like Motorhead for the SEC Championship Game. Even in our seats--where cerebral edema was a real danger--the view of the field and and the action was superb, and the noise level for both sides rattled the eardrums. (This was true even for the outnumbered Arkansas fans, who despite the math woooed and soooied their asses off deep into the foruth quarter.) We come in and find we are sitting in the midst of several adept-level Gator fans and in front of one man so agitated by the game that he's vacated an entire row. For the purposes of this story, we will call him AggroGator.

The color of moldy sherbet, yes; quiet, no.

Leak breaks a tackle like he enjoys it or something, and clumsily flops into the endzone for a TD. He kneels and may be crying on the field. Chris, we're so sorry. AggroGator nearly leaps on our shoulders, high-fives are exchanged, and we begin to wax optimistic.

--Florida's smoothed out several drives, including a few Leak spirals of indescribable beauty. The TD pass to Harvin, who makes up for early drops by shagging this one easy, is grenadier perfect, tossed into the blank notch of the cover 2 with stunning timing. Evil Chris has not shown up yet, as evidenced by his lack of goatee or galling turnovers.

--Sure, there's Blackberries and pocket palms galore, but the real barometer for the now-suddenly-plausible national championship gig is the guy in the luxury suite who's flipping out and giving frantic hand signals to the whole end of the stadium who can see him. He's watching the UCLA/USC game on television, and going into spastic pantomime of what's going on. We go to the bathroom, and grown men holding their penises and urinating are engaging in intense conversations with each other about the updates, with some actually multitasking by pissing and checking the score with the other the hand simultaneously. We get back to our seats, and in the glass box the Gator mime watching the game LOSES HIS FUCKING MIND. The Dome announces the score, AggroGator leaps into the rafters, and huzzahs are made.

--Quick check of a monitor finds that not only is Karl Dorrell stunned and euphoric, he's also been putting in some quality time at the gym. The gun show, ladies, is in the Rose Bowl tonight, and your guide will be Karl. We remind ourselves to thank BruinsNation for letting us post odd IM conversations on their site, which clearly set this whole thing in motion. 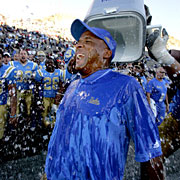 ---Overjoyed. So much so that no one really even blinks when Arky picks up a cheapie interference call and then scores on a jump ball to the 6'6" Marcus Monk. Yeah, well, that's gonna happen, right? Foreboding doesn't even enter the picture. It should have.