WEEKEND REVIEW, PART ONE: TWO LOSSES IS THE NEW HOTTNESS

Share All sharing options for: WEEKEND REVIEW, PART ONE: TWO LOSSES IS THE NEW HOTTNESS

Back from the dead, since a rapid-fire trip to Gainesville, some intense Guitar Hero 2 sessions, a coronary-inducing game against South Carolina, and subsequent joyfest of watching the local ABC game (Wake Forest annihilating FSU at home muhhahahahhahahahahaha!!!) will take it out of a man.

Thank god for federal holidays, though. We have the day off and therefore will be recapping the weekend where 2 losses became the new hottness in college football. The new hottness follows, listed by fad, fashion, or emerging trend you're already sooooo behind on:

Eight-foot tall defensive ends who play special teams. Jarvis Moss may be on the disabled list this week against Western Carolina, since his penis should have burn marks on it from all the action the grateful ladies of Gainesville gave it after he singlehandedly won the South Carolina game for Florida on Saturday. 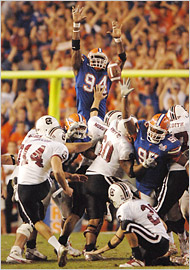 Moss: will miss the next game for all the right reasons.

Moss blocks the extra point following the Cocks potential game-winning TD, and then leaps forty feet in the air to block the Cocks' 47 yard FG, which looked dead perfect before it slapped into the outstretched flesh of Moss' hand. Urban Meyer was supposed to bring offense back to the SEC, but in a game where Florida's best plays came off qb draws and blocked kicks, Meyer appears to have pulled a switcheroo with the ghost of Earl Blaik and taken the SEC back three decades along with Houston Nutt's innovative new "McFaddenwing" offense.

If they face each other in the SEC championship game, do not be shocked to see the winning points come off a fumblerooski, statue of liberty play, or off of a triple reverse pass, which Vernell Brown will mercifully not be around to see. We'll be in the stands with our flask screaming for a punt on third down.

Injure your backup qb prematurely. Be proactive, and injure your starting quarterback prematurely. Have a lineman fall sideways on his knee, or encourage him to stay out late in a bad bar with hundred dollar bills taped to his back. Then encourage his backup to go free solo the nearest 800 foot crag to "confront his fears." Because if you do these things, your team will immediately begin their most improbable win streak in its history, because as a rule your third stringer is the most charismatic person on your team and will lead the team to their biggest victory ever.

We'll call this "The Riley Skinner Rule," which at the very least must be true in certain small towns in North Carolina. After watching Wake Forest players laughing at FSU's play in the fourth quarter of Wake's 30-0 murder of Florida State at Tallahassee, Jim Grobe will be paying players to kneecap his starting qbs and jerry-rigging the depth chart to keep the streak going. How this ever happened for Wake we'll never know, but had they not blown a field goal in the Clemson game, the Demon Deacons would be 10-0 right now and threatening in the national title picture. Again, Bizarro Superman says you're welcome.

USC says fuck you,fuck you, fuck you. Faded? Entering what we called the "trough of a middle-aged dynastic run?" We're beginning to suspect that Oregon and Iowa are the same team playing in different uniforms, since every time we underrate them they pants themselves against someone they're "supposed to beat this year" on national television and remind us why we don't gamble anymore. (Howdya think we ended up watching all of this from an underpass somewhere in North Florida? Choice?)

USC's looking just fine at the moment, and an upcoming matchup with Notre Dame shouldn't frighten anyone since the Irish secondary is still playing fire drill an almost every single snap, something the mindmelded duo of Sarkisian and Kiffin may have noticed when watching film. They should fear Cal, though, since Cal futzed around, ate some Skittles, and paused thoughtfully to look at the sunset while Arizona decided to win a game against them. Pissed and focused is totally the way to go through life, son, and with USC on the horizon that is precisely what they'll be.

USC, though, will likely just keep saying "fuck you, fuck you, fuck you" to anyone who'll put forth inane predictions of their demise. That Pete! He's so mellow and West Coast. It's his freewheeling, breezy approach to the game that makes him so successful. We bet he hangs out at players' houses and plays Halo 2 with 'em and stuff.